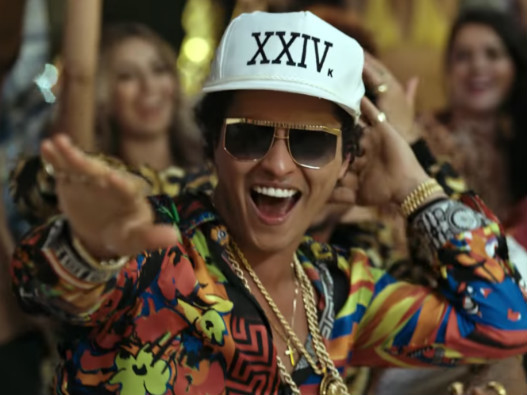 Bruno Mars’ 24K Magic album has spawned another #1 hit in “That’s What I Like,” netting the R&B singer two singles in the top three spots on the Hip Hop and R&B single sales chart. The Weeknd’s “I Feel It Coming” featuring Daft Punk jumped two spots for the #2 slot, and Mars’ platinum-selling title single from his third album, “24K Magic,” caps off the #3 spot.

This week signals a huge shift as last week’s top three as Big Sean, Migos and Machine Gun Kelly all find themselves losing their positions with Mars’ second single making a big leap from last week’s ranking. Migos’ “Bad and Boujee” is still in the top five at the #4 spot and Kyle’s “ISpy” with Lil Yachty rounds out the fifth spot.

Bruno Mars Scores #1 Hit With “That’s What I Like”

Bruno Mars is no stranger to the #1 sales spot and returns with 24K Magic‘s second single, “That’s What I Like,” which sold 166,065 copies for the weekend ending February 16.  With 13 weeks on the charts, the track’s 308 percent uptick in sales could signal another plaque for Mars.

The Weeknd Moves On Up To #2

The Weeknd’s second single, “I Feel It Coming” from his latest album Starboy, which features electronic duo Daft Punk, has been on the charts for 13 weeks as well. It sold 55,139 copies for the week for a total sales of 352,373.

Bruno Mars’ retro R&B groove “24K Magic” has spent 13 weeks on the charts just like the singles that precede it, but of the three, it is the only one to have earned a plaque thus far. Selling 45,513 copies for the week, fans are keeping the single alive and pushing it 1,161,525 copies sold in all.