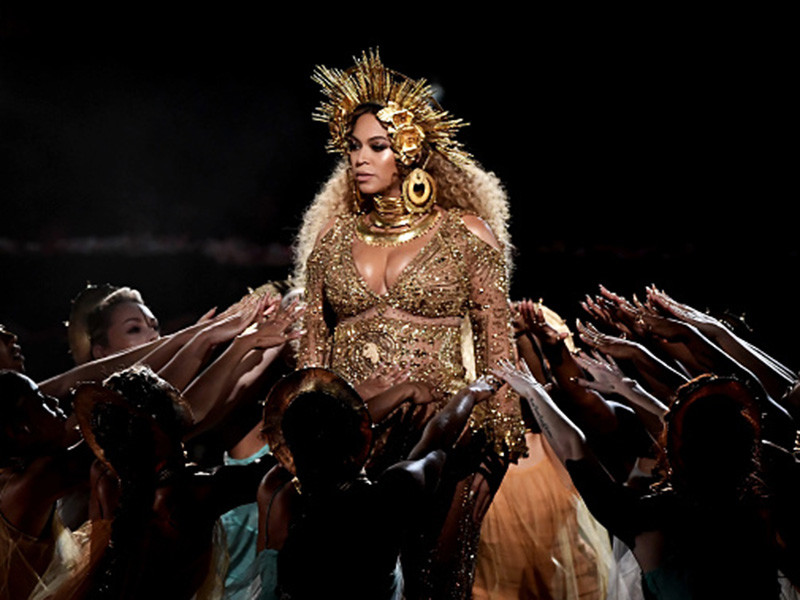 Los Angeles, CA – We have learned to expect nothing but an epic show from Beyoncé when she chooses to grace her fans with a television performance. After performing with Kendrick Lamar at the BET Awards, Queen Bey returned to give a rendition of “Love Drought” and “Sandcastles” at this year’s Grammy Awards on Sunday (February 12). Reminiscent of her 2011 MTV Video Music Awards where she announced she was pregnant with Blue Ivy, Bey gave her whole Grammy performance with twins in tow.

Some viewers were impatient with Bey’s slow introduction.

So is Beyoncé gonna sing or

Beyonce said she gon take her time and we gon deal. #GRAMMYs

But were quieted when she wowed everyone with this seemingly perilous chair tilt.

Isaac Newton: I present my universal law of gravitation theory

Beyoncé: I think not sweetie pic.twitter.com/eLbxJXwQOm

Beyoncé girl! Imma need you to relax.. you almost gave me a heart attack with that chair ? #GRAMMYs

Beyoncé's #Grammys chair tilted back & I lept at my TV to catch her like pic.twitter.com/qWMI0kAINT

ill never trust anything more than Beyonce trusts this chair not breaking pic.twitter.com/MTA4TziJJa

beyonce delivered beautiful vocals while pregnant and leaning back in a chair.

Beyoncé ended holding her baby bump, but the audience didn’t need much reminder that the megastar is pregnant. They even imagined the perfect ending to the performance: her giving birth.

if beyoncé pulls a live birth right now it's game over

I hope Beyoncé plans to give birth on stage

…and Beyoncé will now give birth on stage #Grammys

Beyonce's about to give birth onstage and blow everyone's mind.

Beyoncé is going to be the first person to give birth on the #GRAMMYs stage.

The overall sentiment was one of high praise for the singer whose LEMONADE album is nominated for Album of the Year. Shortly after the performance, she won the award for Best Urban Contemporary Album.

I am convinced every other performance is trash by default because Beyoncé has set the standard so high.

how I feel after Beyoncé slayed my life pic.twitter.com/LTzhOmjjU3

Beyoncé and this beautifully constructed performance, my lord .. this is art ?

And here are some more jokes that didn’t fit anywhere else.

media: beyoncé is pregnant with twins!!! will she be able to perform at the #GRAMMYs??

Call me crazy, but im pretty sure @Beyonce is wearing one of my robes- WOOOOO! #CustomMade #Grammys