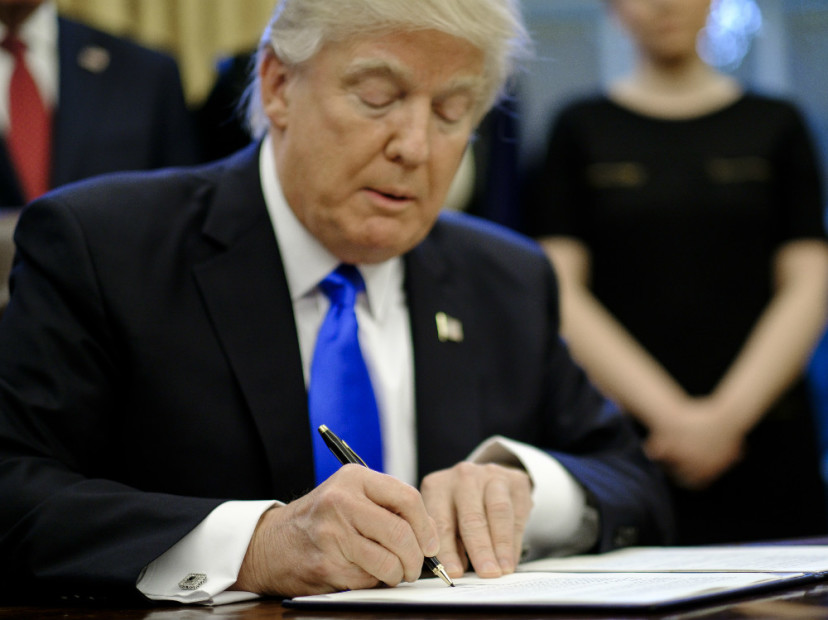 The executive action also bans all refugees from coming to the country for the next 120 days.

In the wake of the news, several protests broke out across the country, including at JFK airport in New York, O’Hare in Chicago, and Dulles in Virginia.

Late Saturday night, a federal judge ruled that the government couldn’t deport some of the newly arrived refugees who were trapped in limbo at American airports after Trump signed the order, reports the New York Times.

Sunday morning, Trump’s chief of staff, Reince Priebus, told NBC’s Meet The Press that the ban wouldn’t impact green card holders, but that anyone traveling back and forth from the countries included in the ban would be subject to further screening.

Trump also took to Twitter Sunday morning with another call for stronger borders.

Our country needs strong borders and extreme vetting, NOW. Look what is happening all over Europe and, indeed, the world – a horrible mess!

Several Hip Hop figures expressed outrage on social media over the president’s latest move in a week that also included an executive order to restore the building of the Dakota Pipeline despite Obama blocking the proposal after last year’s protests.

Many also called out Vice President Mike Pence for a tweet he sent out just over a year ago claiming that banning Muslims from the country is “offensive and unconstitutional.”

Calls to ban Muslims from entering the U.S. are offensive and unconstitutional.

See reactions to Donald Trump’s ban on immigration from Muslim countries below.

Disgusted! The news is devastating! America is being ruined right before our eyes! What an immoral pig you have to be to implement such BS!!

What my USA Black community gonna do to #Trumpageddon Muslim ban? Do we admit we are in a Plantation State of Zero control & relevance here?

What my USA BlackCommunity gonna do to #Trumpageddon Mexican Wall? Do we admit we are in a PlantationState of Zero control & relevance here?

Wait wait wait. Is government starting to turn on religion?? I heard this would happen. Hmmm

I pray the Karma of our country's decisions doesn't doom our children too young to understand or choose their own fate. ? HAS to win.

This #MuslimBan is disgusting and disturbing. #MakeAmericaHateAgain

This is a beautiful story. When we reject Iraqi refugees, we reject Brahim. Shame on America. Shame on Donald Trump. https://t.co/1NzFtUPvm8

Amplifying words of one of my favorite filmmakers, Asghar Farhadi, who like too many others will be turned away from the Land of the Free. pic.twitter.com/CcskcFueuo

yo donald:
latinos & muslims are here doing amazing things for AMERICA
they aren't going anywhere
we ❤ them
deal with it

Maybe we should put a ban on Catholics since Hitler was one. #Muslimban