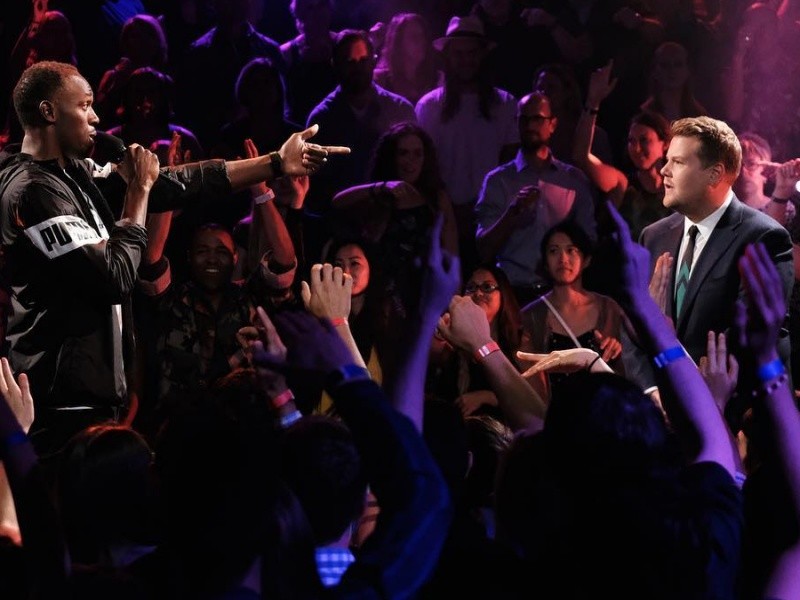 Legendary athlete Usain Bolt made a very special appearance on The Late Late Show with James Corden last night and took on the host in a rap battle for the ages.

After some pretty impressive trash-talk ahead of the clash — “I win everywhere. You never heard the T-Pain song? All I do is win.” — the Jamaican runner had to endure some pretty cutting personals, with Corden going after him for having fewer gold medals than Michael Phelps, and asking “What’s it like to have a career that people only care about once every four years?”

It seemed like Corden might have been getting the best of him but, true to form, Bolt finished strong, nailing the show’s host with “I’m the fastest man in the history of racing, you’ve got the lowest show in the history of ratings — I’ve got nine gold medals last time that I checked, that’s one for every time you’ve had sex.” Mic drop.

There’s no denying that this one was a debatable, but when Reggie Watts put it to a crowd decision they were only ever going to go for Bolt, who celebrated by doing his trademark victory pose.

The bars came from the minds of writers Jensen Karp, Eliza Skinner and Charlie Kesslering. According to Karp’s Twitter bio, Drop The Mic will be getting its own show on TBS in 2017.