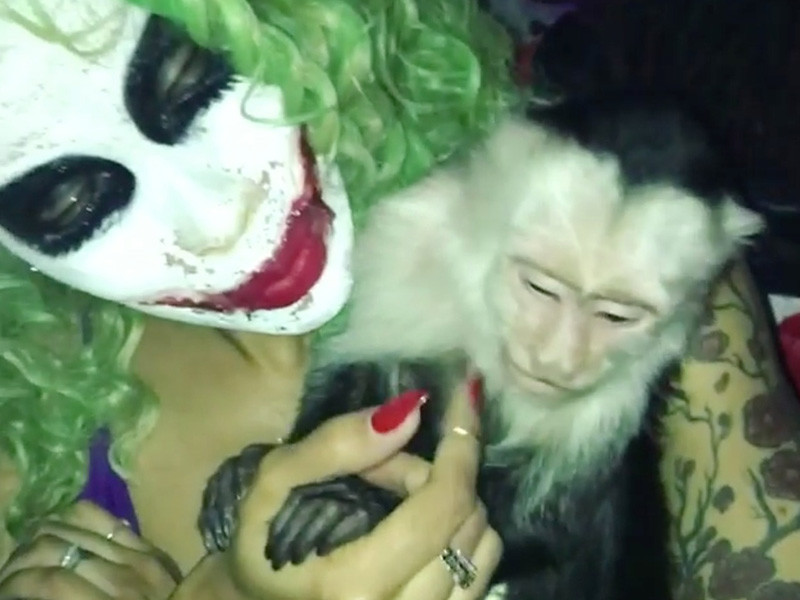 Los Angeles health officials weren’t happy about the appearance of Mally Mall’s monkey friend at the Ace Of Diamonds strip club on Halloween. The L.A. County Department of Public Health slapped the club with an official warning after the rapper’s pet capuchin accompanied Mall to the popular venue, according to TMZ. Another violation could mean the club gets shut down.

Inspectors also reportedly posted “No Animals” signs around the spot, to remind customers (and staff) that the only animals allowed on the premises are service animals and police dogs.

Mall hosted a party at the club on Halloween, where the monkey got a ton of attention.

“[The dancers] loved it. They all wanted to hold him. He was hanging out with some of them. He was chilling. He got a few numbers,” Mall told TMZ at the time.

[This article has been updated. The content below was originally published on November 2, 2016.]

A Los Angeles strip club may soon find itself in hot water, all due to a monkey.

On Halloween, Hip Hop artist Mally Mall hosted a party at Ace Of Diamonds dressed as a sheikh, with his pet monkey, Bubbs, in tow. According to TMZ, soon after the appearance from Mall and his capuchin monkey at the club, the Los Angeles County’s Department of Public Health was made aware of the monkey’s visit.

Given that Ace of Diamonds has a license to sell food, live animals aren’t allowed in the venue, according to official safety codes. The club doesn’t serve food, so it’s unclear if the appearance of Bubbs will in fact be considered a violation.

Despite the trouble Mally Mall and his monkey friend may have put the strip club in, the producer/writer says his pet was loved by both the owner and strippers.

“The owner Sam wants to buy a monkey,” Mally Mall said while speaking with TMZ. “They love how chill he was. That was his first strip club. We took him a long time ago to Crazy Horse in Las Vegas one time. This was the longest he lasted. He partied the whole night. I can’t believe it … They loved it. They all wanted to hold him. He was hanging out with some of them. He was chilling. He got a few numbers.”

Watch video of Bubbs living it up at Ace of Diamonds below.