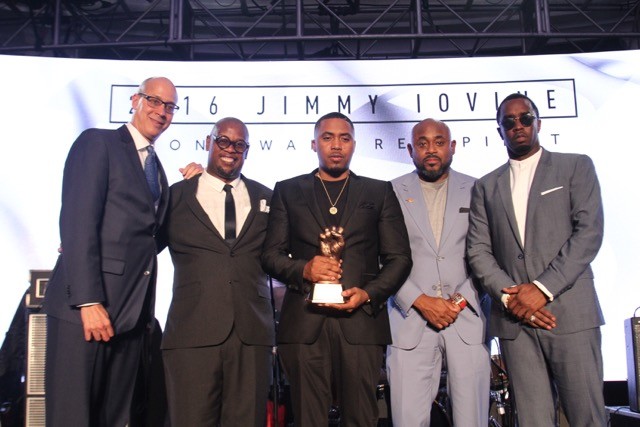 Nas’ winning year attracted yet a milestone yesterday, October 15, in Miami after he was saluted by Diddy at the 2016 REVOLT Music Conference with the Jimmy Iovine Icon Award.

The annual honor is presented to an industry leader who has had a lasting impact and unique influence on music and with more than 20 years of Hip Hop activity which brought forth possibly the greatest rap album in Illmatic, a successful tenure as a Hennessy Brand Ambassador and his Mass Appeal imprint, Nasir Jones has exhibited all listed qualities.

The commemoration concluded a busy and eventful three-day weekend experience that brought forth performances from Kehlani and Bibi Bourelly, as well as special appearances from Nas’ daughter Destiny Jones and their cousin, black-ish star Yara Shahidi.

“We’ve all been thru serious trying times. So to see these men standing strong for so many years and getting stronger by the day…its inspiration,” Nas told the world on Instagram about his honor. “It’s encouragement. And empowering. @andreharell u started all this. Legitimate street corner executive waves, this is what u started. Salute to you King. We continue to lift each other up. Thank you @stevestoute for saving my life! For finding me and helping me find myself. Your words last night was Crazy!” before added the hashtags: “#iconaward #revolt #jimmyiovineiconaward #RMC2016.”

Nas, now 43, also thanked Diddy for not only his friendship but for being his “brother” through several years of rap turmoil that saw their relationship strained and strengthened once wisdom prevailed.

“We’re two crazy mfa’s who somehow figured it out for ourselves. But you are a Leader that we ALL learned from! Truly humbled by the Honor King,” Nas continued in a separate Instagram post. “The future is ours. Let’s continue to pave the way. Love.”

Check out the sights and scenes from Nas’ big moment at the 2016 REVOLT Music Conference down below.