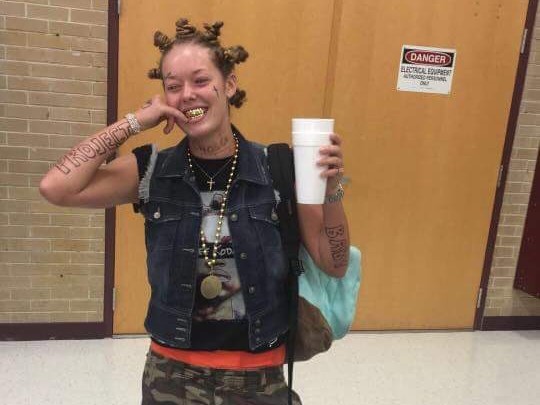 Clearwater, FL – A white high school student from Clearwater, Florida decided that it’d be cool to show up for “Character Day” dressed as Kodak Black and now she’s facing some backlash.

Claire Kemp, 17, is being accused of cultural appropriation for rocking Bantu knots, a “Free Kodak” t-shirt, cut-off jean jacket, camouflage pants, a grill, a gold chain, a Styrofoam cup and a “Project Baby” tatt written with a marker.

One major issue that had Twitter users upset over her costume was the fact that she wore a protective style normally worn in the Black community known as Bantu knots. The hairdo originated with the Zulu tribes in Africa. Khloe Kardashian and beauty vlogger Gilan Sharafani have been criticized for seemingly appropriating the look.

If one of those Kardashians had in said bantu knots yall ready to fight but it's ok when a nb person does it when imitating a rapper? Um.

bantu knots is from african people, its a hairstyle from a culture. it literally says "bantu" https://t.co/K2c8YYWZzm

The real question is who was the traitor who did her Bantu knots… https://t.co/XW2lI9gUBy

Some users were just elated that the high schooler didn’t use black face.

She did it right. She executed her character with out the black face. Black ppl dress as white characters all the time bro.

That white girl dressed up as Kodak Black isn't bad. Why she picked him, idk but she didn't blackface it which would've made it bad

Since when white people can't dress up as rappers? Lol ain't nothing wrong with this. As long as she don't have blackface, she alright. https://t.co/OpUQrNL7B4

we're not asking y'all to not dress up as black celebrities, we just don't want y'all using blackface.

Kemp stands behind her decision to wear the costume even with the criticism.

“People kept saying it was racist. I had never even heard of Bantu knots until today—I thought I was just doing Kodak’s hairstyle,” she says in an interview with Daily Dot. “Racism is still a big issue, but they don’t know it’s an issue that I care about. They don’t know me or who I hang out with or what I do.”

In other Kodak news, the Florida rapper was sentenced in one of his ongoing cases last month after pleading no contest to two misdemeanor drug charges in St. Lucie County, Florida. He also faces up to 30 years for a sexual battery charge in South Carolina.