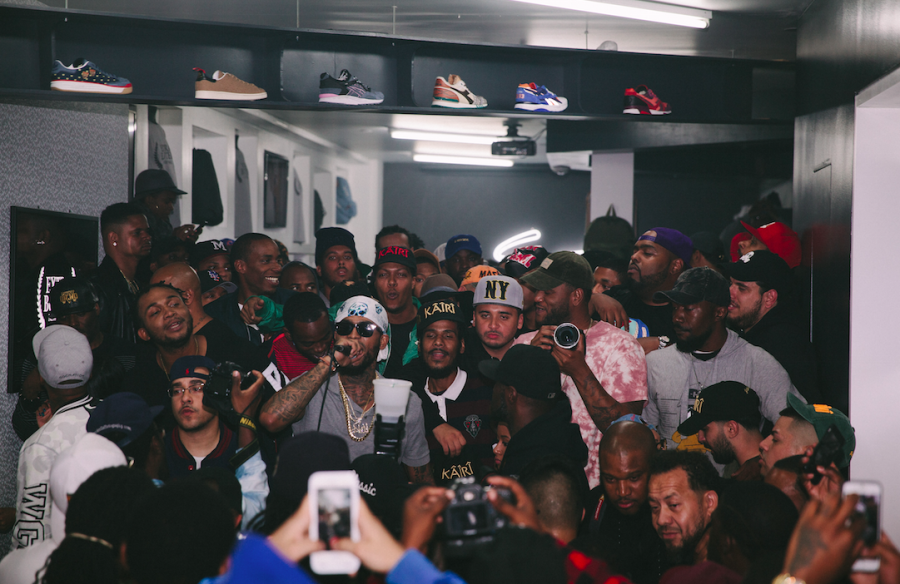 New York City, NY – The first thing Dave East did upon arriving at New York City sneaker shop Extra Butter on Thursday night was pop a bottle to share with his crew.

After all, the Harlem rap-star-in-the-making had two reasons to celebrate. Hours later, his new album Kairi Chanel, would finally be available for stream or purchase. He and Rob Markman of Genius.com were set to introduce the songs to the audience.

But just earlier that day, even bigger news was revealed: the ink had just dried from a new deal with the legendary Def Jam Records, known for ascending the careers of fellow East Coast rappers like Jay Z, LL Cool J, Method Man & Redman, among others. So Kairi Chanel was both the latest step in Dave East’s career, and a sign for the future of one of rap’s most iconic labels.

“This is a big moment for me, my whole team, my whole family and everyone that’s been supporting since day one,” East told the crowd, which also included another Def Jam standout in Jeezy. “I just appreciate the fact that they let a real nigga in the building, and the streets are fucking with it.”

East and Rob Markman of Genius.com introduced songs, explaining their backstories and purposes. The album was named after East’s daughter; he says he recalls the album being crafted while his woman was pregnant with her, constantly arguing with her on the phone before hitting the studio.

From there, he played and described the songs: from the intro “It Was Written” (“this is pain right here,” he admits) to the penultimate “Don’t Shoot,” which tells East’s experiences with police. He also relived writing “The Real is Back” with Beanie Sigel; the song has separate rhymes from each of them, with them going back and forth on the last verse.

“I had to do that with Mac. I didn’t want no club record, I wanted some shit-talking shit,” he said.

At the close of the event, East spoke about how far he had come over recent years, and how he’s ready to keep pushing forward.

“This shit came from nothing, for real. It looks dope to like the pic, but I was fucked up. I ain’t have a chain, nothin’,” East said at the end of event. “This is me now, but this is what I made a year ago. … I’m just getting started.”

All photos taken by @durtyharry.