The Lyricist Lounge Making A Grand Return At 2016 A3C Festival 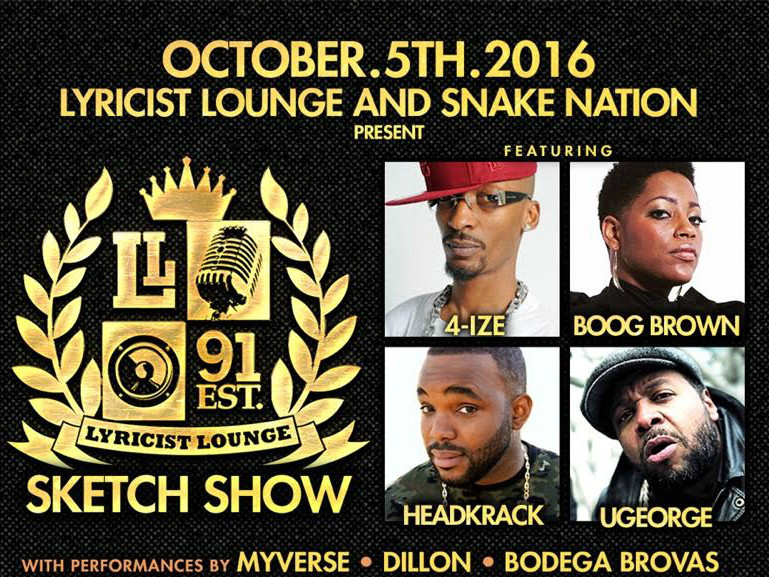 Atlanta, GA – Get ready for bars on bars on bars as this year’s A3C Festival is welcoming the Lyricist Lounge. The Hip Hop expo, which was founded in 1991 by Anthony Marshall and Danny Castro, has featured elite rappers including the Jungle Brothers, Biz Markie, Masta Ace and Scarface. It has toured nationally three times and had its own MTV show, which showcased the talents of Mos Def, Snoop Dogg, Common, Erykah Badu, Wordsmith, Slick Rick, MC Lyte, and even a pre-fame Tracee Ellis Ross, among others.

We over here at HipHopDX hope you made a good run at our 2016 A3C Festival ticket giveaway because it’s going to be a good one. We caught up with Lyricist Lounge co-creator Ant Marshall who exclusively broke the news to DX about the upcoming A3C set.

What’s the thought process behind that? You know according to so many people, there are no “lyricists” right now.

I think what we’re doing is a little different than what everyone expects. Obviously, we’re known for doing the showcases and lot of other things. This time, it’s more about bringing the sketch show aspect back. We’ve still been doing showcases here and there, mostly New York but for right now it would be a good time to bring the sketch show back and do it kind of in the clubs at first, then doing it in theaters, then back to television. We have a really dope crew of folks. My man 4-Ize, who’s been rockin’ with Ludacris for a long time. We got this young lady named Boog Brown who’s down with the Working Class Crew. We got Headkrack, a personality and part of The Rickey Smiley Show, and a number of other things like the Bodega Brothers and all that. Then we have UGeorge, who’s been part of the Atlanta scene with a group called Hemisphere back in the day. But ultimately it’s really been about creativity and pushing this art form to the next level. When you talk about lyricist and you talk about the whole conversation about mumble rappers vs lyricist or whatever the case may be. That’s a whole ‘nother conversation in itself, but what we’re trying to do is move away from the competition of generations and have some fun, do something different. We started something 16-17 years ago with the TV show that no one really ever try to replicate. Except for

It definitely maximizes potential and what it can do for people. Who did the writing for the sketches?

4-Ize, he’s the head writer right now. He has written 98% of the sketches we’ll be doing that night. Everybody has their spin on it, their take on it. For instance one of the sketches we got is called “Weave Bomb.” Basically a story about this bomb detective that has to disable this bomb, but it happens to be rigged to this woman’s hair weave. You have this whole thing playing out between 4-Ize and Headkrack and UGeorge and Boog Brown. It was written by 4-Ize but Headkrack changed it up. Changed his voice to a well known Hip Hop personality. I don’t want to spoil the surprise but he’s been able to take on all these different voices and really just turn it into something different. At the end of the day, I feel like it’s something we need, especially when you talk about the older generation; I’m 43 now and as much as I love the culture and in every aspect, sometimes we’re too serious. Sometimes we need a break. And it’s not always going to be all just funny shit, we are looking to do more serious pieces, I think that’s when theater allows us to flex our muscles a bit. You look at Hamilton or other plays; the success of Hamilton which I haven’t seen, but it’s been compared to Lyricist Lounge and some of the other things we’ve been up to. And so what we’re looking at is the ability to do something cool, do have some fun and take Hip Hop in another direction with the possibility of creating spinoffs from that, that go in other directions. So that’s what we’re looking at now.

Nice that was my next question. What would be the ideal goal? Have you guys thought about bringing it back on social media? Like an Instagram series?

What we’re looking to do is record each sketch that we create or the best of the sketches we create, they’ll be shot as individuals and then we’ll put those out on youtube and spread them around social media. Motion Family is one production company that says that they’re down and interested to shoot it. They’ve been doing a lot of the music videos that come out today. We can shoot it in a good way and people will get to know it that way learn the lyrics and all that, then they’ll come out to the show and see it performed live. In this generation we’re not even doing any set design, it’s just raw four cats on a mic, but because it’s so visual what they’re talking about, I think it’s about to fuck people up. We’re so used to a show. Somebody with a DJ and saying ‘Yo I’m gonna rock my song’ we’re not used to changing that up a bit. And to have that theater type feeling, things playing out in sketch form in a club. I just think we’re going to bring something different. Then we’ll take it to the theater and charge people 60 dollars. But for now, we’re going to keep it raw. So see us now while you can, catch us in the club while you can. Word up.

I love what you said about not going back and forth with mumble rap as well. I think there can be two different lanes in everything. Want actual MCs to be the dominant sound, I think that might be the fight in that aspect. This takes talent to do versus other stuff, do you ever see just raw emceeing ever become a dominant sound again?

Dominant sound I think it really depends on the industry. If the jobs at Clear Channel change over to the right hands to keep the culture true, then it will. That’s really at the heart, it’s not about the artists and the MCs and the creatives, it’s really about the business minded folks making an adult decision to lead with content that will help people instead of destroying the community. At the same time, this term “mumble rap,” we have to be careful about that because it’s like when people started saying backpackers with a negative context. It’s like you can’t really put a label on everybody and that’s just what it is. Some of these little young kids got lyrics and may not be in the way that we want to hear it, especially a lot of New Yorkers, me being one, but it’s in their way and we can’t fault them for doing it in a way that represents them and their generations. You know I try to stay out of that convo and get behind the shit that I want to push. That’s really what’s ahead. Instead of calling these kids out, a lot of us old heads need to call these kids directly and bring them over to the crib or go meet up with them and go play them some shit instead of just talking shit about what they’re not. They’re 18 and 19 — my brand is 25-years-old. It’s older than some of these kids how can I expect them to even know Unless we do the work? We got to do the work and reach out and not just fester in this feeling of what it used to be than what it is now.

But of course I love real Hip Hop shit, I love the lyrics. I love true shit, but then I love the melodies and the beat and production. I think the biggest disservice to all of this is when you group everyone together and you call it wack, you really do a disservice to the producers that created the sounds, cause that song is not just made entirely by that MC. It’s a 50/50 thing. Some of these young producers are doing a great job, some of them are just copying each other. Some of them are doing a good job creating a new sound. It is what it is.

The Lyricist Lounge 2016 A3C Edition is going down courtesy of Snake Nation on October 5, 2016 at The Earl, located at 488 Flat Shoals Ave SE. Admission is free with an official A3C badge or $10 at the door. For tickets to the festival, visit here.