Ta-Ku Has A Huge Tour & Talks Collaborating With Anderson .Paak 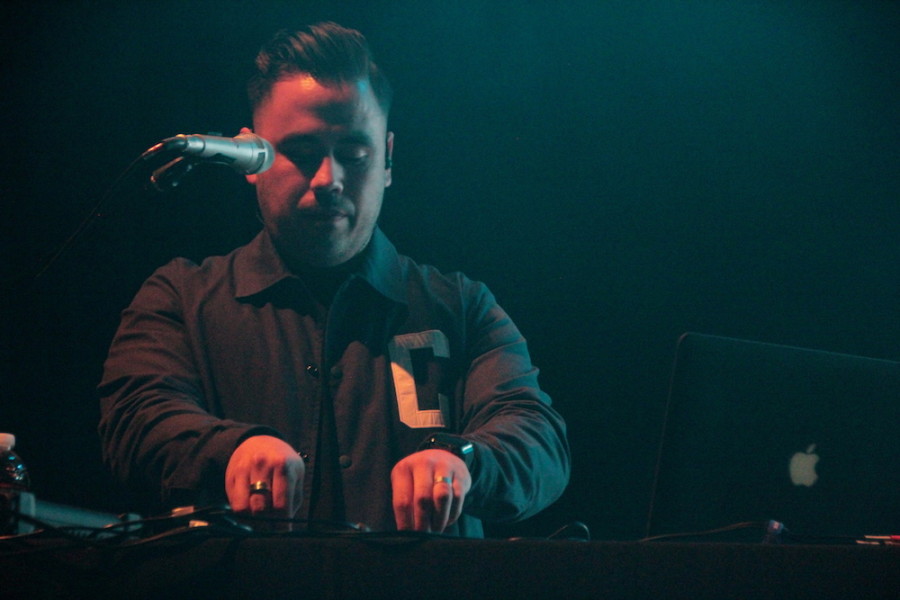 Los Angeles – Spending time with Ta-Ku within the walls of Koreatown mainstay The Line Hotel, it’s clear that he’s just as calm and sharp as he was on stage during the previous night’s performance, where he headlined a show at LA Live’s Novo Theater alongside singer/songwriter Wafia. Together the two are promoting their (m)edian project — concrete evidence that the man also known as Regan Matthews has evolved from being a self-proclaimed “bedroom beatmaker” to a full-on musician.

Anyone following his career has seen this coming.

Last year, Ta-Ku dropped the critically acclaimed Songs To Make Up To. That project was credited by former HipHopDX editor Andre Grant as a display of Ta-Ku’s “ability to initiate sounds that convey a meaning directly.” The (m)edian EP further expounds the sonic mastery of the producer who counts Cyhi The Prynce and Jaden Smith as collaborators.

During our conversation, Ta-Ku gives info on exactly how he improved his craft for (m)edian, some upcoming projects and his current thoughts on Hip Hop.

HipHopDX: What goes into a Ta-Ku performance? It seemed like sensory overload at moments.

Ta-Ku: That’s good. It kind of evolved over the last year or so. We did a two-show run last November. Since then, it’s evolved into telling a more visual story. Me and Wafia worked on more music together, so we included that. We were trying to make it cohesive and interesting. Just trying to make sure the visuals were on point. It’s definitely not a one-man show. It’s a whole team behind it, which is cool. My good friend who does a majority of the visuals is a personal friend of mine from Australia. We used to make music together on the same label ages ago, but he switched into visual arts and animation. He’s been killing it working for commercials, companies and TV. I sent him an EP of the songs and gave him a breakdown of what I wanted in the visuals. It felt like what it should’ve conveyed. Intel worked with us as a partner to do some really cool stuff with face-scanning, 3D projection and all of that stuff.

DX: Dope. It’s like we’re living in the future already. You had Masego open up for you, who is getting a buzz for blending everything from Trap to Jazz into his music. Where’d that idea come from?

Ta-Ku: Funny thing is that when we did the Europe tour, our videographer showed me Mesago and his song “Girls That Dance” and I thought ‘This guy is refreshing.’ Seeing what he does live — I’ve checked him out on online videos and saw how honest, raw and spontaneous he is. I thought it was awesome having him. He’s a lovely guy and I’m honored to have him on board.

Working With Wafia For (m)edian EP

DX: Songs To Make Up To is about a year old. What’s changed creatively about you since then?

Ta-Ku: I think with the EP with Wafia, it’s definitely me moving into more songwriting and trying to use my voice a little bit more. This is new to me, but it’s been an awesome learning curve. I don’t know what’s next for me. I’m just going to ride this out and see what my voice can do. It’s all brand new to me before I decide what to write next.

DX: Have there been any challenges with you leaning more into songwriting and upping your vocal game?

Ta-Ku: A lot actually. It was quite scary. Last night we performed a song for the first time together and it was nerve wracking because doing that in front of people is never easy. It’s something you have to throw yourself into whether you nail it or not. I think it’s about keeping it going and hoping it works out. And, if it doesn’t, that’s how you get better. You learn from your mistakes.

DX: Why work specifically with Wafia?

Ta-Ku: She always pushes me to try different things and do things outside of my comfort zone. Plus, she’s just an amazing singer and songwriter. It’s been pretty crazy getting to work with her because it’s a whole new world. She’s pretty new to the music industry too, but you could never tell. You’d think she’d been here for a while.

Wafia: We had already started working together for the record. I was already nervous when we started making music together. You put yourself out there and hope for the best. The outcome was good, but I was really nervous. I think that’s why we were so happy to get other collaborators on board because what if we hit a wall? We were both scared, but our chemistry was good.

Ta-Ku: I come from a bedroom producer background and I didn’t know how to play an instrument. I’m not a Ryan Leslie so we brought in other friends who do that. They’re good at thinking on the spot and it helped the flow.

DX: How exactly did you guys translate that to your live show?

Wafia: I think performing the songs together and watching it come alive, it was good seeing people take ownership of it in the audience. The musicians are great in their own right so watching them listen to the songs and take after it was amazing for us. When we’re performing live, Ta-Ku does things vocally that he doesn’t do on the track. I think his voice has improved since we recorded that. It’s really exciting for me.

DX: What’s the crowning achievement for you guys in regards to creating the project?

Ta-Ku: This EP is — compared to my earlier stuff — they wouldn’t know that it’s me doing the vocals. I know a lot of people on social media and even now, don’t know the vocals on the (m)edian. It’s kind of cool. This project for me is such a big step. To be going from making beats to writing a song and getting into vocals is pretty surreal for me. As a beatmaker, I didn’t know. Even having a microphone in front of me during the show is weird, but it’s the best experience.

There Is A Track With Anderson .Paak In The Stash

DX: As a beatsmith, you’ve done work with Jaden Smith. Have you had any surprising moments in regards to artists being attached to your work?

Ta-Ku: Funny, I literally made beats for rappers and just wanted anyone to pick one up. Any rapper. Even if they were mediocre. My whole outlook has changed where emcees and vocalist are artists in their own right. I think that producers are stepping out of that shadow outside of being the guy in the studio behind the decks. There are artists who make beats headlining their own shows and festivals. Back in the day, I remember when Cyhi The Prynce picked up one of my beats and I was freaking out. I was showing off to my friends. Lately, I try to make music for myself now. I’m not trying to make music for someone else unless it’s a collaboration. I think a lot of producers are like that now, which is super exciting.

DX: Rap-wise, where are you at right now?

Ta-Ku: I’m always stuck between ’94 and 2002. Nowadays, Masego is a breath of fresh air just because of the things he talks about and his content. I just got put on to Lil Dicky not too long ago. I think he’s really refreshing too because of his subject matter and how he delivers. I find the way he interacts with his fans pretty refreshing as well. I’ve been a fan of Anderson .Paak and he’s killing it. We did a song together, but because he’s big time now, we’ll have to wait to release that since he got signed to Aftermath. I have so much respect for artists like that who work hard and push the envelope.

DX: Any thoughts on the current mumble rap controversy?

Ta-Ku: I think it has its place and merit. It’s just something I can’t relate to. I tried. It has great energy and people love it. I see why. I’m just stuck in the past when it comes to rap.

DX: After (m)edian, anything else in the stash?

Ta-Ku: I’ve been writing my album. I got these crappy beat tapes and all these miniature EPs. I just need to work on my debut album which I’m excited about, but I have no idea what it’s going to be. I think I have a direction, but it’ll probably be a combination of everything I’ve done on record. We’ve gone through different kinds of genres and stuff and I want to bring them all together.