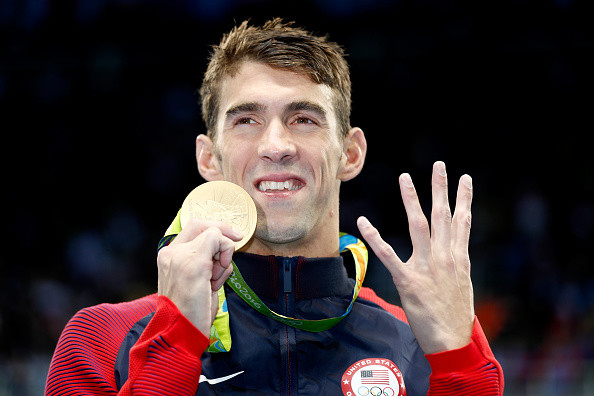 Rio, Brazil – Michael Phelps is no stranger to Hip Hop and he’s certainly not unfamiliar with winning.

The most decorated Olympian of all time famously told the world he binged on Young Jeezy and Lil Wayne during the 2012 London Olympics and four years later, he’s leaving it all in the chlorine at this year’s Summer Games in Rio. Phelps, 31, exited Brazil with five gold medals and one silver, bringing his all-time tally of precious metals to 24, as he assured his adoring fans that he’s retiring for good this time around.

While preparing for last week’s 200-meter butterfly semi-final where he was bested by South African’s Chad le Clos (Phelps would go on to take the gold in the final), his icy “death glare” spawned by his pre-game musical ritual became the catalyst for endless memes and during a Facebook Live chat with PEOPLE, Phelps let the people in on what he was listening to and the answer should surprise no one.

When you gonna beat your little brother down, but you gotta wait for mom to leave the room. pic.twitter.com/bP99rmqrct

“I had some Lil Wayne from ’08, Steve Aoki from ’08…when I was in the ready room getting ready to go out, I was listening to Nero and Skrillex, just kind of really trying to get going. I was just trying to really get going and really get amped right before I would walk out and [the music] helped a lot – I was sometimes tired.”

Both respective eras for the rap megastars (Eminem was coming off the massive success of 8 Mile and The Eminem Show at time; Weezy credibly held down the title of “Best Rapper Alive” with his platinum-in-a-week album, Tha Carter III) could be considered the peak of their careers so there’s no surprise Phelps chose to soak in those particular tracks.

Phelps’ full Facebook Live interview can be seen below. As always, check in with the HipHopDX Facebook page this and every Thursday for another edition of DX Live.