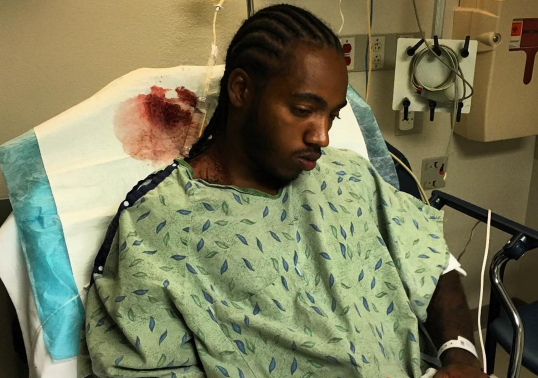 Atlanta, GA – Fourth of July weekends typically beget violence all across the country and Love & Hip Hop Atlanta cast member Sas has just felt one of the worst cause and effects of that terrible statistic.

The rapper son of LHHATL star Karen King was shot in the back of the head last night (July 2) according to his own accounts via Instagram.

“Doctors told me I got a bullet in the back of my head man,” he told his near-100k followers on social media, as he showed off his blood-soaked pillow. “They said I’ll be alright, though. They say I got a thick skull” he continued, managing a smile to reflect on his good fortune.

Y’all pray for me, though. I appreciate all the love and support. God got me. Allah got me. I ain’t tripping.”

Authorities have yet to release any details on the Sas shooting but at an Atlanta strip mall parking lot at 2100 Cheshire Bridge Road, police had their hands full when they came across the body of 35-year-old Jokisha Brown on Friday, July 1, hours before her 36th birthday. FOX5 Atlanta reports no suspects are in custody as of yet but her close friend Jordan Jackson told WSB-TV that Brown was a survivor of an “abusive relationship.”

Police have been investigating Brown’s ex, Alfredo Capote, for rape and kidnapping since April of this year but as of press time, he isn’t listed as a suspect in her murder.

Several members of the Hip Hop community took to social media to offer their condolences.

We grew up in the exact same environment around the exact same time. It feels damn near like I lost my sister from the streets. I was lil duval and she was ms lil duval. It's really hard to explain our relationship unless you grew up in our life. And if u met her you'd never know the life she came from and how much pain she's experienced in her life. I remember when she moved to Atlanta she came to my house and said "I finally left for good" I'm not even hear to show how tight our bond was but everybody that really know me understands. You're with yo brother and your pops now joKeisha and surprised them on your birthday. Love you.

My whole life has been turned upside down Wow I can't believe this. I don't want to believe this. Not our angel . God I have so many questions right now God please help me make some sense of this ?? #RIP @kisha_theactor such a beautiful soul and talent. The world will miss you angel. #RipKisha ?????? #justyesterdaywetookthis ??❤️?