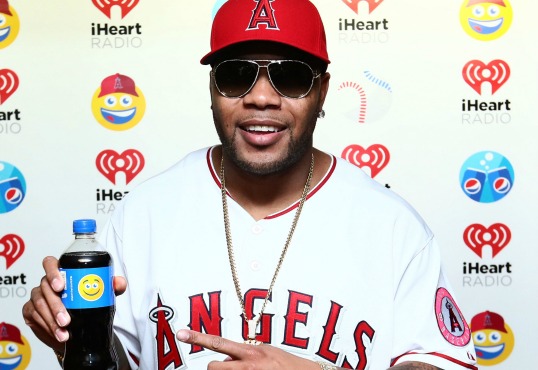 Anaheim, CA – Flo Rida’s success should never be undermined. After immediately making an impact on his 2007 debut with the uncoordinated dancer national anthem in “Low,” he has gone on to sell more than 80 million digital singles worldwide and still has no signs of slowing down. If you turn on your TV at any given time of the day, you’re liable to see a Pizza Hut commercial championing his latest smash “My House.” The popular pizza franchise’s trusted beverage provider in Pepsi has also recruited the Grammy-nominated star to be the face of their new PepsiMoji campaign that does a bang-up job of inserting their legacy into today’s social media generation.

Not too shabby for a guy who once walked several miles just in the hope that he could get his music in the hands of Nelly?

On Tuesday, June 14, the Los Angeles Angels of Anaheim bested the Minnesota Twins for the first of their back to back wins and fans who stayed behind at Angel Stadium were privy to a special performance by the Only One Flo, which was jumpstarted by an introductory show by Australian newcomer Grace.

Flo did what he’s best: rousing several contradistinctive demographics and finding that common interest in his music. Both aforementioned records were performed in full (complete with ladies being invited on stage during “Low” and one getting to rock his chain) as were “Good Feeling,”Wild Ones” and “G.D.F.R.”

HipHopDX was able to catch up with Flo prior to performing to see how this latest endorsement came about and how he feels about getting respect amongst Hip Hop audiences.

“For the most part, I think it’s just an honor to be accepted by Pepsi,” an appreciative Flo Rida tells HipHopDX. “I definitely think they’re a good brand; I grew up drinking Pepsi. So it’s just a blessing; you get two for one: they support you and you get a chance to have an amazing something to quench your thirst.

Chad Stubbs, VP of Marketing, Pepsi TM, calls the company’s new #SayItWithPepsi initiative “a completely fun, fresh and shareable way for fans to express their emotions,” and Flo Rida even has his custom PepsiMoji that is available for consumers to download for free in the Apple App and Google Play stores. He shares he was amused reading his fan’s social media commentary debating whether or not it did his likeness justice but he chuckled “much love to everyone who thought it look like me.”

Keep Your G.O.A.T. Debates. Flo Rida Is About Positivity

With so much discussion on what constitutes as actual Hip Hop or not, Flo is usually left out of the conversation as his music tends to attract fans who probably couldn’t tell him apart from a Rick Ross. None the matter; Flo Rida gets money that he doesn’t have to brag about but as an entertainer, he gets to spread love the right way.

“It’s been just about 10 great years and prior to me even getting a record deal, I’ve dibbled and dabbled it all types of music,” Flo admits. “I’m a big fan of all types of genres of music. So for me it’s an experience; I’m always trying to broaden my horizons. I get a chance to travel all over the world and put smiles on different people’s faces, shake different hands and just see the blessing that music can do and bring the unity bring to the world. So I’m all about the laughter, the fun. I’m somebody who has a huge family and just to see the joy of my family experience as well as my friends.

I remember starting out I really didn’t look at the charts like that but to see me up top [of the charts] after doing it so long, I embrace that more than anything. The positive side.”

Once upon a time, Flo Rida was just like every other up-and-coming rapper: broke, ambitious and without connections. Upon hearing Nelly was in his town for a concert before he got signed, the 36-year-old star risked blistering his feet to oblivion by walking several miles just to get

“It’s just one of those situations where you believe in yourself so much to no matter what hurdle is in front of you, you’re going to stand up to it,” he recalled of his trek. “As you can see, I’m standing here today and I got family and friends around the world. It’s still a hustle.