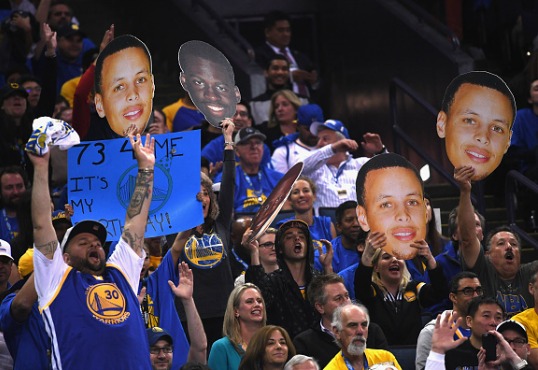 Oakland, CA – April 13, 2016 will do down as one of the most memorable days for professional basketball. The much ballyhooed Kobe Bryant farewell dubbed Mamba Day actually lived up to its hype as the retire future Hall of Famer managed to put up 60 points on 22 of 50 shooting and steal the win from a hapless Utah Jazz team. Kobe became the only player to stay 20 seasons with the same team and finishes as the 3rd all-time leading scorer in NBA history.

His career, just like the Lakers season, is finito, however.

Meanwhile, up north in Oakland, a different group of Californian basketball fans were witnessing another historic moment. The Golden State Warriors capped off a record-breaking season as they surpassed Michael Jordan’s 95-96 Chicago Bulls by finishing with a record of 73-9. Fans rocked the Oracle Arena roof off as the hometown squad defeated the Memphis Grizzlies by a score of 125-104 and Stephen Curry was his typical nutty self; scoring 46 points (which included 10 three-pointers) that brought his season tally of triples to 402. (We repeat, he made 402 three-pointers this season.)

The stage is set for a high-octane championship run but the stakes are higher should the Warriors squad fail to capitalize on their greatness like the aforementioned Bulls team, who not only won the title losing just a handful of games but also had current Warriors coach Steve Kerr on the roster.

Saturday marks the first day of the 2016 NBA Playoffs where Golden State will resume business and face off against the Houston Rockets. But for now, all their fans are celebrating the rare achievement. Including their populated Hip Hop community.

Check out the varied reactions down below.

Got to watch mamba put up 60 in his last game… And the Warriors break the record… What a day for basketball ??

73-9… Record part is over. Now let's get the most important part. The championship. And be the best team in NBA history @warriors

I'm not gonna troll Kobe BUT don't play around like 73 ain't more important for the CULTURE.