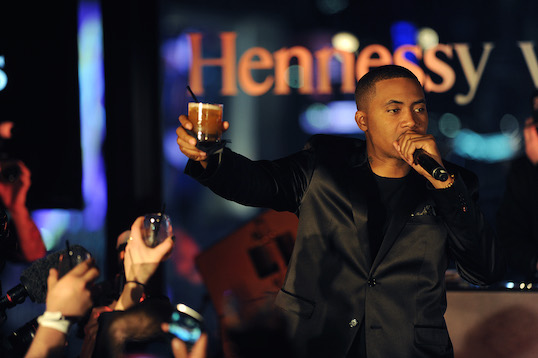 As far as brand endorsements go, Nas and Hennessy’s alliance has been one of the most organic partnerships Hip Hop has ever witnessed. When Nas’ name dropped the ageless brand on his debut Illmatic; tenably the culture’s best full body of work, a precedence for enjoying the drink in the utmost sophisticated of settings was etched in granite, long before any contract was inked with those legendary three letters attached to it. Now on their fourth year of pas de deux marketing, the world͛s #1 Cognac (by way of sales, not delusion of grandeur) has entrusted the storied MC to narrate the new campaign, “The Piccards” as part of the Wild Rabbit series. The campaign has been privy to numerous awards in the past such as the Cannes Silver Lions Award in Film Craft and the Impact Blue Chip Brand Award and this year’s theme centers around the Auguste and Jacques Piccard, the first men to breach new environmental boundaries, by becoming the first reach the stratosphere and reach the deepest depths of the ocean, respectively.

Hennessy recently held a celebratory dinner at The Mondrian located at Ivory on Sunset and HipHopDX were among the special guests who got to gain some exclusive insight on the Nas’ latest role within the company before it was actually announced. God’s Son engaged in table talk and humbly absorbed every amorous compliment thrown his way but he did take some time out to explain why, of all the brands in the world who can dangle a lofty check, he chooses to celebrate that Henrock.

“Hennessy and I have been working towards the same end goal,” he tells DX. “To make sure we inspire people to push the limits of potential in whatever they do. As you may know, I’ve been talking and rapping about Hennessy since Illmatic. In 2013, I was the face of the second year of the brand’s “Wild Rabbit” campaign. In 2014 the Wild Rabbit campaign featured iconic racecar driver Malcolm Campbell – I provided the voiceover for that TV spot. This year, I’m lending my voice for the newest iteration of the campaign called “The Piccards.” The message behind the campaign is all about pushing the limits of one’s potential and breaking down barriers. Never stop. Never settle. I believe in this message. I push my own limits every day, every moment – in the studio, on the stage and beyond so it’s truly a genuine fit.”

Nas has enjoyed several wins during his brand ambassadorship but probably the one that resonated with Hip Hop fans the most was his 2014 commercial titled “The Ride,” which showed him casually traveling through the NYC subway system as his personal hometown theme song, “N.Y. State of Mind” wallowed in the background. Nas called the now hard-to-find TV spot “iconic” and reflected on how strong that particular clip was for everyone who witnessed it.

“[The commercial] took my fans through my years of career’s progression and how the world around me changed,” Nas said, obviously pleased with the final product himself. “It was a look at the people, places and events that helped shaped my lyrics and thinking. Even though everything around me was changing, I remained true to my craft, specifically through my hard work and dedication to pushing the limits of potential. That’s why I’m so committed to my work with Hennessy; they’ve remained true to their craft, the family and heritage–everything that goes into making them great-through the past 250 years. It’s that commitment to quality is what keeps them successful.”

The new “Piccards” rollout injects a bit of marine biology and aerodynamics into the mix, giving the brand’s videography a completely new aesthetic, as seen via the exclusive preview below.

“I know the visuals and story behind this year’s iteration of the Wild Rabbit campaign, The Piccards, will capture the world’s attention as much as “The Ride” did,” Nas assures. “As for the future, you never know what might happen,” he said before adding, “I’ll always be a fan of Hennessy.”