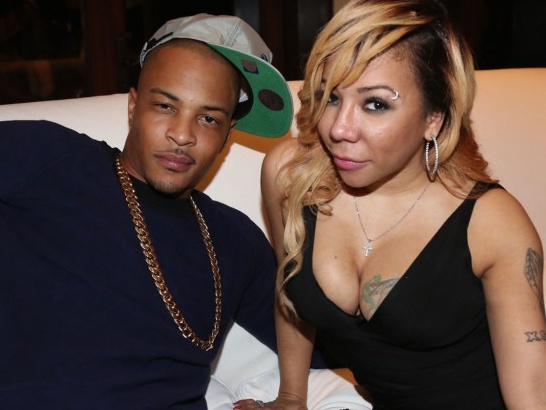 T.I revealed the name of his and and wife, Tiny’s, seventh child on Twitter. The couple have named her Heiress Harris.

“Welcome Home Heiress!!! The Ride Begins….#FamilyHustleOverErrrthang” the Atlanta rapper writes with an image of himself carrying the daughter’s carseat.

Heiress is the couple’s third child together and first daughter. T.I., who now goes by TIP, also has Clifford “King” Joseph Harris III and Major Philant Harris with Tiny. The rapper has two sons and a daughter from previous relationships and Tiny has a 19-year-old daughter as well.

The couple lost a daughter in 2007 when she was born stillborn six months into the pregnancy.

Tameka “Tiny” Harris released a statement yesterday (March 27) about the birth of her child and her husband’s location at the time of the birth. The statement is as follows:

Yesterday, March 26th, at 2:58PM we welcomed a beautiful baby girl that weighed in at 5lbs.

In true Harris fashion, our baby girl made us all HUSTLE, making a surprise early entrance.

While we expected her to arrive around April 20th, our PERFECT baby girl decided March 26th was the right time for her DEBUT.

My husband, Tip Harris, went from the stage right to the plane from his show in Las Vegas and luckily, made it to Atlanta with time to spare.  Our whole clan was together to see our beautiful healthy baby girl make her way into the world.  Just the way I like it!!

We are looking forward to more exciting times with our #Lucky7.

There are fake social’s floating around on Tip with erroneous reporting.  Please take note of the official social media Handles:

T.I. and Tiny welcomed their seventh child over the weekend.

According to VH1.com, T.I. and Tameka “Tiny” Harris’ seventh child was born on March 26th. The child, a baby girl, serves as the couple’s third child together.

News of the birth first broke via social media, after The Shade Room uncovered an Instagram post from Tiny’s niece.

“My little cousin is here. You know, last night I went to go see my auntie. And she had the baby today,” Tiny’s niece said in an Instagram video uploaded this weekend.

T.I. later confirmed the news in a Facebook post, but also expressed his upset over the fact that news of the birth broke before he and Tiny could share it themselves.

“What really pisses me off is that I’m in SouthCarolina & my wife just had our baby in Georgia which is really not something anybody could help & the fact that everybody gets to announce that ‘T.I. & Tiny welcomed their baby into the world’ EXCEPT T.I. & Tiny. Couldn’t even wait until we properly announced it but ‪#‎Lucky7‬ is here!,” T.I. wrote yesterday (March 26).

Additionally, Tiny shared a social media post of her own, a picture from the hospital with friend and fellow singer, Kandi Burruss.

A name for the couple’s baby girl has yet to be announced.

Social media posts from both T.I. and Tiny, can be found below.

#PressPlay: According to her niece, #Tiny and #TI welcomed their baby into the world today!!! Congratulations !!!