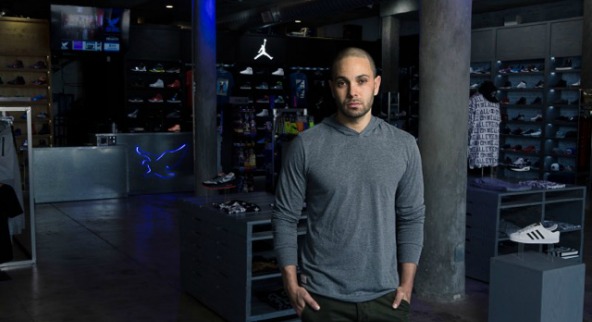 Los Angeles, CA – Hip Hop culture has ceremoniously adopted fashion into being one of its most sacred elemental properties and the competition for servicing consumers is just as steep (if not more) as actual artists battling for spots on mainstream platforms.

For much the early 2000s, online streetwear supplier Karmaloop ruled the space, raking in hundreds of millions of annual revenue before it all came to screeching halt followed by a devastating financial death. The highs and the lows of the brand’s history was detailed extensively in Complex’s July 2015 article, “What the Hell Happened to Karmaloop?” with actual accounts from its founder, Greg Selkoe himself.

Realizing that the brand’s name still had potential, West Coast based retailer Shiekh Shoes, a major player in the space in areas that spans across 136 stores in 10 states, seized the opportunity and acquired the brand earlier this week.

HipHopDX recently spoke with Matt Fine, President of Shiekh Shoes, about the new pillar his company has added to its foundation and how it will expedite the nature of their growth.

“We had some discussion when we initially saw it going to bankruptcy but over the course of time and some organic conversations, it just sort of naturally came about,” he tells DX, harboring on the early business talks.

Fine declined to go into specifics on the specific dollar amount Shiekh Shoes acquired Karmaloop for but he assured the deal “made sense” for all parties involved.

“I’m saying that honestly,” he said. “The sellers were very happy with how [the acquisition] transpired and the way we set it up is a way we feel will bring tremendous value. Every time you have a deal like this, you want to have a win-win scenario.”

Shiekh Shoes opened its doors with one just store in Southern California in 1991 and has been steadily been making leeway ever since. Fine—having spent nearly 12 years at Nike obtaining the position Cross Categorical Sales Director—is an expert in the field, as he previously dealt with Shiekh personally. He also understands the value of maintaining (and growing) the working relationship between the clothing and Hip Hop worlds. For example, Tyga held an in-store press conference last year at Shiekh’s Hollywood location to unveil his Liquid Gold L.A. Lights to the world. Expect to see more of that continue to blossom in the near future.

“There has been a natural connection between Hip Hop music and sneaker culture,” Fine acknowledges. “A big source of inspiration is Hip Hop. It’s probably the most importance influence in the kids we service, both male and female. When you look to the Karmaloop scenario, it’s a big part of the kids’ life as well so we knew that consumer well.”

Following the announcement of the change of guard, both Selkoe and previous CEO, Seth Haber, echoed Fine’s sentiments on the acquisition.

“This is a great deal for all involved, a true win-win. I look forward to watching the team at Shiekh Shoes take Karmaloop to the next level,” Haber said while Selkoe reflected on starting the company in his parents basement in the Boston-area but elation that it was in the hands of another brand who “respects the culture.”

Despite the amalgamation, Karmaloop will continue to live on as a standalone brand. A move that Sheikh says will use to its advantage to expand their nationwide footprint. Fine calls it “another avenue for growth.”