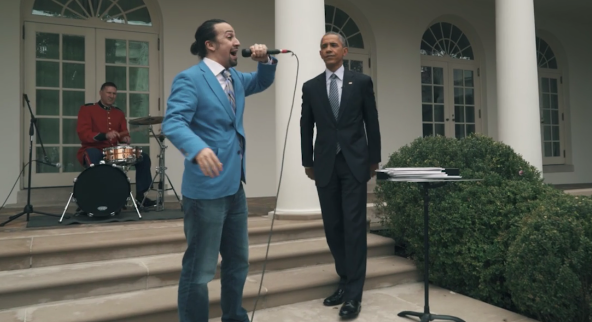 Washington, D.C. – Fresh off of his win for the Grammy Award for Best Musical Theater Album, Lin-Manuel Miranda, the star of the critically acclaimed Broadway play, Hamilton, was been invited to the White House.

The highlight of the invitation wasn’t exchanging Dr. Peppers and selfies, however. President Obama brought Miranda into the Rose Garden where they engaged in a cue card-flipping, off-the-top freestyle. The topics on the cards predominately centered around politics such as “Obamacare” and “Congress.”

According to NBC News, the entire cast spent the days touring the White House, and First Lady Michelle Obama hosted a student workshop and a performance of songs selected from the musical.

The last time Miranda, 36, was invited to the president’s headquarters, he debuted a rap about Alexander Hamilton inspired by historian Ron Chernow’s biography of the Founding Father who is immortalized on the $10 dollar bill. The moment became the basis for the play which was transferred from Off-Broadway less than six months after its premiere.

“I remember being in the cast of [the Tony Award-winning] In the Heights when Obama was running in 2008 and how amazing that felt, because my parents and my parents’ generation were like, “He seems really great, but our country’s just not ready,” Miranda recalled in a July 2015 interview with Billboard. “That first time, when I did it at the White House for the first few minutes, everyone was like, ‘What’s happening?’ But by the end they’re kind of like, “Ohhhh, we kind of like this.” That has been a microcosm of the Hamilton experience.”

Ahmir “Questlove” Thompson and Tariq “Black Thought” Trotter of The Roots served as the executive producer of the show’s soundtrack.