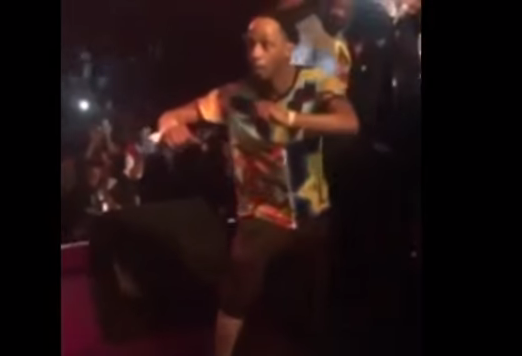 Katt Williams Gets His Perm Stomped Out At Beanie Sigel Concert

Katt Williams has had a wild, self-induced attention grabbing, past seven days. After firing an unprovoked warning shot at Kevin Hart and subsequently challenging to a battle of any proportion, (rap, fight, comedic, bake-off?), he softened his stance, calling his actions “egregious” and apologized to both Big Tigger and Hart on V-103.

The moment of clarity appears to have been short-lived as Williams, 44, was recently spotted on stage at Beanie Sigel’s concert at the Trocadero Theatre in Philadelphia last night (March 6) engaging in all sorts of peculiar behavior. Multiple videos with different angles have emerged, capturing the embattled comedian doing everything from uncoordinated dancing to push-ups to squaring up in a fight stance, which eventually led to his undoing as one camera capturing him charging a man before he was knocked to the ground and kicked in the head by several onlookers.

Shortly after the Hart viral incident, Williams once again got himself into trouble not once, but twice after five women in Gainsville, GA accused him of holding them at gunpoint after he agreed to take a photo with them but “became irate” after they begin filming video on March 2. A day prior, he was charged with battery after allegedly punching a 54-year-old salesman at nearby Leslie’s Pool Supplies. Williams claimed the clerk was not only a racist but the aggressor in the incident.

Watch the most recent altercation where Katt bites off more than he can chew in the videos down below.