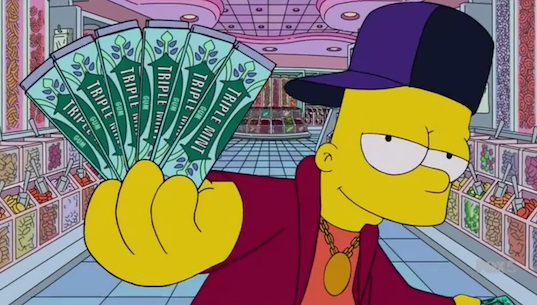 FOX’s The Simpsons has been going strong for 27 consecutive seasons, so it is pretty much a given that there has been no pop culture stone the show’s creators have left unturned.

That streak continued this past Sunday on the series’ historic 588th episode (titled “Gal of Constant Sorrow”) when Bart Simpson showed love to Toronto all the way from Springfield by recreating Drake’s “Started from the Bottom.”

After receiving his payment for renting out his closet to a kind homeless woman named Hettie, television’s ageless 10-year-old proceeds to hit the 98¢ Store with his BFF Milhouse and live out his rich fantasies–much like Drizzy did in the visual for his lead off single to his platinum-selling album, Nothing Was the Same.

With just a few bucks to his name, Bart grabs every child-oriented trinket and piece of candy in plain sight as the “Started From the Bottom” chorus plays on repeat.

Drake has yet to officially appear as a Simpsons character but rap stars such as 50 Cent, Cypress Hill and Ludacris have all made cameos in the show’s iconic cartooning.