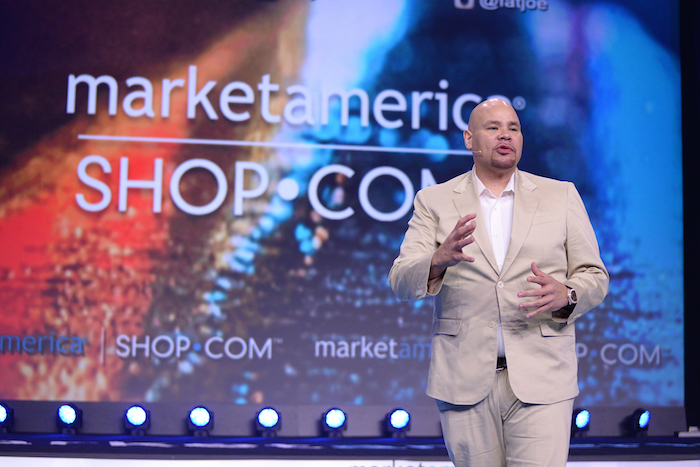 Fat Joe knows what you’re thinking when you see him in a suit and tie. Misinformed opinions still don’t slow his hustle, however.

The veteran rap aficionado is no stranger to taking the stage in front of thousands of screaming people but over the last couple of years, that scenario was altered ever so slightly.

Crack, born Joseph Cartagena, had traded in his trusty mic sword for a wearable one and those gaudy Terror Squad chains and custom denim fits were swapped for subdued business casual attire. As for the potent street parables? The end message of hustling to achieve one’s dream aligned with the raps that made him a platinum-selling draw. Yet, it was more like spoken word that he was really putting down in the people’s ears.

Over the last couple years, Fat Joe has been heavily involved with Market America, the “the product brokerage and Internet marketing company” started by J.R. Ridinger that has found its way into several notable lists within the stock realm. Joe serves as the President of Urban and Latino Development and ahead of his presentation at the 2016 Market America World Conference, he spoke up about preconceived notions about Market America’s “buy-in” setup while inviting anyone with the drive and focus to join him on the quest.

Can a young brother get money anymore? Apparently, that answer remains yes.

HipHopDX: Your career is so storied so you can imagine the people’s surprise when they saw you in full motivational speaker mode, with the suit and wireless mic to match. How did all this come about?

Fat Joe: The founders and CEOs are good friends of mine. Scratch that; they’re not even friends. They’re family. For over 14-15 years. They’re some of the best people in the world. So one day I was hanging out with my man J.R. and I asked him, “How many people do the business you in?” and he replies, “180,000 people.”

So I ask, “How many are black? How many are Latino?” And he says, “Two” for both. And I’m like, “Damn, so how many are white?” And he say, “One hundred thousand.” I say, “How many are Asian?” He say, “Eighty thousand.” I ask, “Yo, J.R., if you hang out with black and Spanish people everyday, how the hell they ain’t working for you?” And he say, “I’ve been trying to tell them about the business but they think it’s a white man trying to take advantage of them. Now this business been around for 24 years and made close to $7 billion dollars and people that we call UnFranchise Owners — that’s what I am — made $3.5 billion dollars back in their pocket.

HHDX: And the notion of this being a pyramid scam…

Fat Joe: The numbers don’t lie. The data is there to prove this is a successful business. It’s all about when people take the knowledge that they get and apply it to their business and become successful. In a sense, all we’re doing is opening the doors and giving the average person an opportunity to become an entrepreneur and make six-figure income. And some people make up to seven-figure income. It’s all about how work you hard and how hard you work. How dedicated and relentless you are to succeed. Also, if you’re a follower of Fat Joe, you’ll know that I will never sell my people out; I will never sell my soul. It’s not the easiest thing in the world. People just got to get off their ass and it will really, really happen for them. But I don’t see no other opportunities that’s letting you [get in] for close to nothing and have the opportunity of building your own business.

HHDX: How does this benefit minorities, per se?

Fat Joe: Basically black and Latino people have been hustling forever but we’ve been hustling backwards. Now we have an actual system where we can hustle one time really hard and make residual income for the rest of our lives. That is what is unique about this company. And I’ve always been the type of person who wanted to give back. I’ve always thought of others first. So how else could I have a better karma-based system than to help people own their businesses, put food on the table and at the same time benefit as well?

HHDX: What kind of products are you dealing in? Do you manage a specific area in the company?

Fat Joe: We sell different products. We sell vitamins. Our OPC-3 vitamins are the best vitamins in the world because of their delivery system. We got makeup. We have over two million followers on our Motives Instagram. Carmelo Anthony’s wife, Lala Anthony is actually the brand ambassador of Motives Cosmetics. We got a weight loss system just like Nutrisystem or Weight Watchers, we have the TLS Weight Loss Solution. It the last six months, we recorded people have lost over 50,000 pounds all over the world. So we sell whatever is the number one seller and we find a way for people to make a profit off of it.

HHDX: With everything going in the right direction for you with Market America, does that mean the music is on ice?

Fat Joe: Never! The people are going to love what I’m doing this year musically. We just finished the Diggin in the Crates and the Remy Ma and Joey Crack album. Both projects came out really, really phenomenal. We’re currently in the process of shooting the first video from the Joe Crack/Remy Ma album. A nigga just out here in those streets, you know?

HHDX: In a nutshell, you found ways to make both worlds collide.

Fat Joe: Definitely. In the conference, I have some surprises planned but I’m pretty much telling the UnFranchise Owners about my experience being an UnFranchise Owner. Just because I’m Fat Joe “the rapper” doesn’t mean I got a bigger hookup. I got to get out their and show the plan, sell products, motivate my team to go out there and become big businessmen as well. So I’m going through the same trials and tribulations they are as well.

But nobody ever really shows you their hustle. Nobody really shows you how hard it was for them to succeed and make it. It’s all about the finished product. Whenever I try and tell everybody: Fat Joe may be looking nice or whatever but you didn’t seem him at the Apollo Theater trying to rap and get on. You didn’t see him sneaking into record labels trying to play his demo. You didn’t see him knocking on people’s door talking about, “Please put me on.”

I always try to show the truth of what’s been going on since day one.

For more information about Market America visit their official website.