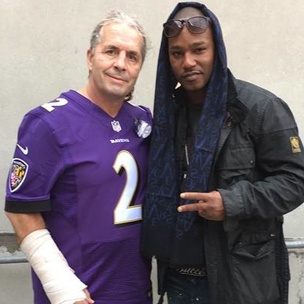 Cam’ron Crafts New Music Thanks To Bret “The Hitman” Hart

Cam’ron reportedly recorded new music after linking up with a Canadian financial company.

According to TMZ, Cam’ron and wrestler Bret “The Hitman” Hart will serve as the new faces for Sharpshooter, a financial company based in Canada.

Paul Pitcher, the CEO of Sharpshooter, says Hart was initially brought on to represent the company, and Cam’ron followed soon after.

“[Cam] and Brett hung together for a whole weekend and went to a Ravens game together. He was down from the very beginning,” Pitcher said while speaking with TMZ.

Pitcher also revealed that the partnership has led to an album’s worth of new material from Cam. A snippet from one song was uploaded to the TMZ website.

On the song, Cam’ron raps: “Like Brett I’m a sharpshooter, Hitman / Check the charts, you can see all the hits, man / Let’s walk the Red Mile/ Y’all bow down.”

It’s currently unclear if, or when, Cam’s album’s worth of material will be released. The snippet of Cam’ron’s Sharpshooter-inspired song, can be found below.