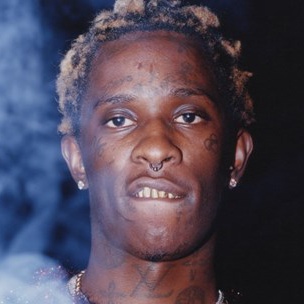 When pressed to reveal details of his work with Kanye West, during an appearance on The Angie Martinez Show, Young Thug revealed that he’s recorded 40 songs with ‘Ye, but likely has “way more than that.”

Thugger also revealed that due to confidentiality agreements he signed with Kanye, he’s isn’t allowed to speak on the details of their collaborations.

“Me and him, we did a lot of songs,” Young Thug said. “A lot of rhythms. So, I guess we’re just placing ‘em and getting them together. Getting them together now and unfortunately, I can’t give you a date on that due to the papers I signed with him.”

During his interview on Power 105.1, Young Thug was joined by 300 Entertainment founder, Lyor Cohen. Cohen was also relatively tight-lipped when it concerned the details of Thug and Kanye’s work together.

He did speak on Kanye attempting to stay relevant by taking note of the new “creative risk-takers.”

“This is what I do know,” Lyor Cohen said. “I’m desperate to listen. The reality is this, you have two of the most creative forces in this game today, collaborating…Part of his job as being an artist of his stature—And the way an artist of his stature stays relevant is trying to understand who’s out here. I’m not surprised. Kanye is a genius. And he’s constantly looking for other people who are prepared. Who are risk-takers. Creative risk-takers. So, perfect. Call Thug.”

Video of Young Thug speaking on the songs he’s recorded with Kanye West, can be found below.