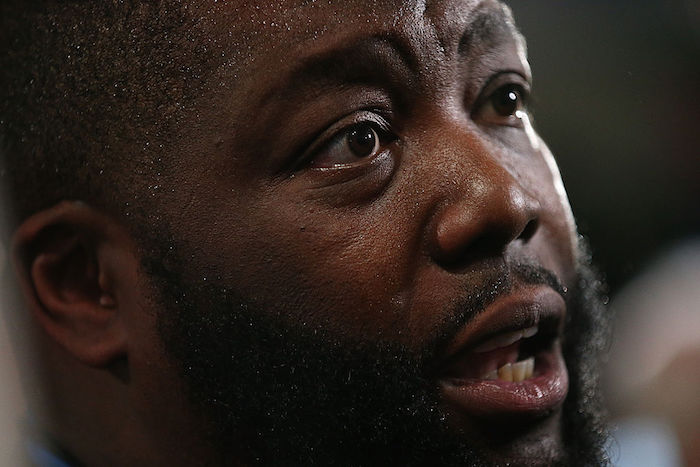 On the afternoon of January 18, Amber Coffman, vocalist for the band Dirty Projectors, mustered up the courage to publicly share an incident when she was sexually molested by a “well-known” publicist within the music industry.

During the course of the recollection, she detailed the troubling encounter with “her ass being rubbed” and her hair being bit by the man she later outed as Heathcliff Berru, founder of Life or Death PR. The firm boasted a roster of several high-profile artists including top-tier Hip Hop acts such as Tyler, The Creator, Killer Mike, D’Angelo, GZA. Following Coffman’s testimony, several hundreds retweeted her words in support and a handful of other women stepped up with similar run-ins with Berru.

This was someone I barely knew and had just met. He did it in front of 4 of my male friends. Still makes me so damn mad thinking about it

Still mad at myself as well for not punching him in the nose, but I totally froze up. Weird survival instinct I guess

Just was looking at their current roster and it's amazing. People I know even. Funny how shitty, fake ass people can have so much success

And in case anyone was wondering who the ass rubbing, hair biting mother fucker was, I'm not afraid to say it-

It was Heathcliff Berru, at Life or Death PR and MGMT

I've been told many women have had scary stories about him for years but are scared to speak up. And dudes overlook it and keep hiring him

The following day, Berru was visibly ousted from his position as CEO and released a statement to LA Weekly, which read in part, “I am deeply sorry for those who I have offended by my actions and how I have made certain women feel. If I crossed the line of decency or respectfulness in situations when I was drunk and under the influence, there is no excuse of course…I have been fighting a losing battle against drugs and alcohol for many years and will be checking into a rehabilitation facility in the hope that I can improve my chances of winning that fight,” combined with an assortment of other apologies.

Killer Mike also chimed in, applauding Coffman for her bravery and revealed that he will continue to do business with his direct publicist, Duncan Will.

My Publicist Lost his wife, biz & Rep. My friend Got an ear full from me about how fucked up he behaved. Amber deserves all our support

And she and those other women have mine.

My day to day publicist is Dunkin and he will continue to be. Cliff is still my friend and i will support him in being a better human being

Into the best version of himself we all know is there. My best wishes again to Amber and all the women involved. Your bravery is Admirable

Just heard that Life or Death PR has dissolved. Smart, but still want to hear more from them about Heathcliff's actions + their complacency

Love that Heathcliff's initial statement uses "alleged." He knows damned well what he did. That's what I call a half assed apology

Proud & Support my friend @Amber_Coffman thank you for your bravery.

RAINN, The nation’s largest anti-sexual assault organization, employs a 24-hour hotline at 1-800-656-HOPE (4673). If you or anyone you know has befallen victim to any sort of sexual misconduct, do not hesitate to allow your voice to be heard.