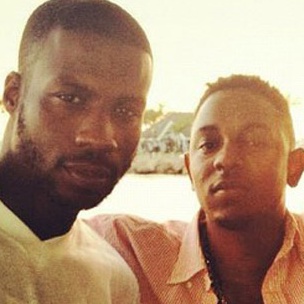 In the newly-released visual, Jay Rock encouraged those in the community to “join forces.” He also applauded Kendrick for standing up for peace and love in the community when he could have taken another, more selfish route.

“We don’t care who you is,” Jay Rock said. “Blood, Crip, Mexican, Chinese. You feel me? If you about doing something positive with yourself and your community, let’s join forces together. Cause they can’t stop us all if we all together…That’s what it’s about. Bringing unity, so our kids can grow up safe…Fearless, that’s how I can describe my little brother. With all the things that’s going on in our society today with our sisters and brothers being killed. Kendrick Lamar, he has stood up for peace and love in our community. When he could have just stood up for himself.”

Glasses Malone chimed in with his own thoughts on Kendrick Lamar. He recalled K-Dot rapping beyond his years when he was just 18.

“I remember him rapping, but he was saying some shit that nobody 18 was really saying at the time. I hadn’t really ever heard even other great rappers at 18, saying the shit he was saying,” Glasses Malone said.

Video of Jay Rock and Glasses Malone speaking on the impact of Kendrick Lamar, can be found below.