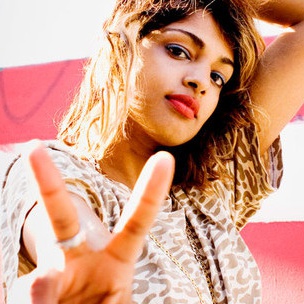 London-born rapper M.I.A. may soon be struck with a lawsuit from the Paris Saint-Germain soccer team.

According to TMZ, Paris Saint-Germain isn’t happy with M.I.A. wearing their jersey in her “Borders” music video. Both the song and music video tackle issues pertaining to the refugee crisis.

On “Borders,” M.I.A. raps: “Guns blow doors to the system / Yeah fuck ’em when we say we’re not with them / We’re solid and we don’t need to kick them / This is North, South, East and Western.”

In response to the “Borders” video, and Paris Saint-Germain’s belief that M.I.A. wearing their jersey suggests that they’re a part of the refugee problem, the team’s general manager penned a letter to M.I.A.’s label.

“This association is all the more hard to understand that nothing in our activities and in our daily initiatives suggests we have anything to do with the problems highlighted by M.I.A,” general manager Jean-Claude Blanc wrote, according to TMZ.

Paris Saint-Germain is now demanding that M.I.A. get rid of the image of their jersey in her video, or face legal action.

In the “Borders” music video, the rapper wears an altered version of the Paris Saint-Germain soccer jersey. On her jersey, the “Fly Emirates” slogan is changed to “Fly Pirates.”

“Borders” was released last year, and is expected to appear on M.I.A.’s next studio album, Matahdatah.

The music video for “Borders,” which shows M.I.A. wearing the Paris Saint-Germain soccer jersey, can be found below.