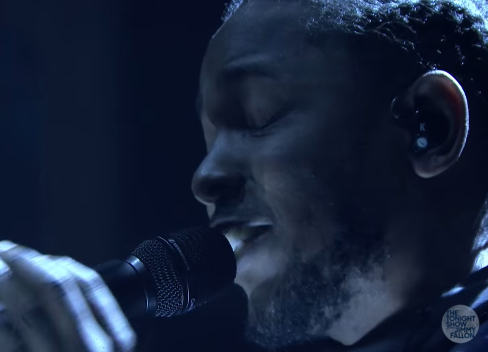 Kendrick Lamar’s scheduled appearance on The Tonight Show Starring Jimmy Fallon went down as planned this morning (January 8) and even packed a surprise for viewers who eagerly tuned in.

The To Pimp a Butterfly scribe debuted a new record which served as the predecessor to his Colbert Report-premiered “Untitled” that also happens to fall in the same vein as his latest Grammy nominated album.

“Two tears in a bucket, I cry with you/But I could never lie to you/I could never afford not to afford/I could never put my plans to the side with you/I could never see a red light/Like a deer with the headlight/I freeze up when I re-up,” Lamar passionately rapped at the track’s opening, which continuously built up emotion as it neared the crescendo.

Like the song before it, “Untitled 2” most likely won’t be released in studio format so fans should soak up the live performance with every viewing.