Before becoming a superstar you’re never prepared for paparazzi, gossip and the extra attention that comes with fame. Miley Cyrus has radically gone from a teen icon to a pop sensation, and her moves confuse the world though we can’t stop paying attention. Where some consider her a trainwreck, she has proven to be a marketing genius in control of her image. More than an entertainer to master the art of gaining publicity, she is a humanitarian with a creative spirit that can’t be easily contained. For this, we have named Miley Cyrus “2015’s Most Misunderstood Rebel.”

Since becoming a household name as the Disney Channel’s Hannah Montana, Miley Cyrus has taken her star power from television and film to excel in music. Exploring more adult themes since exiting her teenage years, press and critics have had a field day with Miley’s more recent eccentric behavior, and while she certainly stirs controversy, her progression into adulthood deserves more respect than shaming. In a world that asks pop stars to be clean cut, her originality shines through and makes a positive statement for herself and womanhood alike. Miley has followed her childhood dreams of becoming an actress, and much like Madonna she has had a blast acting out ideas that confuse judgmental audiences.

The media focuses most on Miley Cyrus when she lets her outlandish side fly free on stage, ignoring the fact that she’s dedicated to making a positive difference in the world. Working with the Stand Up To Cancer organization in 2008, she participated on the charity single “Just Stand Up” and her active involvement in Disney’s Friends For Change organization showed concern for environmental issues. As well, Miley’s contributions to Art For Freedom celebrate free speech while protesting global discrimination. Yet somehow these important stances go overshadowed by those who blindly assume she’s all shock value.

With Miley Cyrus growing up in the public eye, it is no surprise her change of direction has thrown the world for a loop. After becoming a Disney mogul, (the first to have deals in television, film, consumer products, and music within the company) selling millions of albums and achieving global success, her reinvention became necessary for the sake of staying inspired. Pushing the envelope, her strong branding and magnetic personality have shined as she’s experimented with new sounds on 2013’s Bangerz and most recently Miley Cyrus & Her Dead Petz. Edgy live performances including the 2013 MTV Video Music Awards have proven she’s brave and ultimately carefree about public perception, which only feeds her hype machine.

As the press, fans and haters wait to see what Miley Cyrus will come up with next, we bet she’ll continue to be a free-spirited spectacle. On 12/19, you’ll be able to see her take the stage in Los Angeles by watching her action packed show live and on-demand, exclusively on go90. 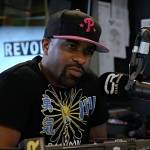 King215Mal wasn't impressed with his chicken and waffles — not at all.