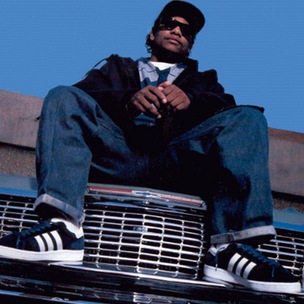 Eazy-E reportedly died due to complications stemming from AIDS in 1995, but one of his sons says that the late rap pioneer was killed.

“I’ve been known my pops was killed.” Yung Eazy says on his Instagram account, in which he describes himself as the third son of Eazy-E. “His death never added up 2 what ppl have always said maybe they think we’re idiots blind to the truth idk….but 4 u new fans, youngsters & ppl who just don’t know much.”

Yung Eazy points to how his father is portrayed in the recently released Straight Outta Compton film as evidence that foul play was involved in his father’s death.

“notice in#StraightOuttaCompton Eazy did not get sick until after the studio incident with suge and look how he acknowledged & admits on this interview with #JimmyKimmelinjecting ppl instead of shooting them is a new thing that’s done,” Yung Eazy writes on Instagram. “Oh n let’s not touch the topic on Ice Cube naming his album “Lethal Injection” #FreeYourMind#RipEazyE #EazyE #FuckSugeKnight.”

Yung Eazy is not the only person with ties to Eazy-E who believes that the Ruthless Records founder was murdered.

In 2011, B.G. Knocc Out, who had been signed to Eazy-E’s Ruthless Records, made the same assertion during an exclusive interview with HipHopDX.

“I believe in my heart somebody did something to Eric,” B.G. Knocc Out said at the time. “Whether it was Jerry [Heller], whether it was [his widow] Tomica [Woods-Wright], I have yet to really know the truth about it.