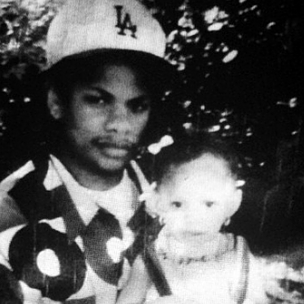 “Overall, I think it’s an incredible film,” Erin Wright says. “It’s very powerful and historical, and I’m really excited for everyone to see it. I also have to speak on Jason Mitchell, who portrayed my father. He just did a phenomenal job.”

Speaking on the portrayal of her father by actor Jason Mitchell, Erin Wright says that she feels no one could have played the role better.

“In real life, Jason and I have hung out and he’s my really good friend, but when you see him in costume and on the big screen, it was kind of scary,” she says. “I mean, I literally felt like he was my father, and he did a great job. Even just the memories that I have with my dad, and all the stories I’ve heard, and everything that I’ve imagined in all of these years is what I saw on the screen from Jason and I could not be more proud. I don’t think anybody could have played my father better than he did.”

Wright also spoke on the lasting legacy of the film.

“I think this is a classic film, and they are a classic group like The Rolling Stones, and The Beatles and this is a story about the revolution,” Erin Wright says. “Even today it’s still so relevant with a lot of things that they touch on from police brutality to racism and things that are still going on today, and it’s very informative and I think people are going to love it forever.”

Erin, who was just four-years-old when her father passed away, also opened up about what her mother has told her regarding Eazy-E’s relationship with the other N.W.A members in his final days.

“They did have a lot of issues behind Jerry but they were younger then, and they didn’t really understand the business back then correctly,” she says. “What my dad and Jerry did was equivalent to what Dr. Dre and Jimmy Iovine did today. So I think with them being older now, they get it. At the time, things may have seemed off, but before my father passed away, he did speak with Dre personally and he did want to get them back together. But, unfortunately, he did end up passing before all of that could happen.”

Elsewhere in the conversation, Erin spoke on a documentary that herself, her mother and her sister are working on that is set to detail Eazy-E’s life and in particular, the scandal surrounding the rapper’s death.

“My sister, my mother Tracy, and I are producing a documentary which will go into more of my dad’s life and his story,” she says. “The movie touched a little bit on his life, but overall, it was the story of N.W.A. and how Ruthless was started, and all of that but it just wasn’t about Eazy-E. So in the documentary, I’m going to touch more on my dad’s life but it’s mainly going to focus on his death and a lot of things that people don’t know including all of the scandal behind it, the conspiracy behind it, and what happened afterwards.”

To read the full interview, please visit rolling out.