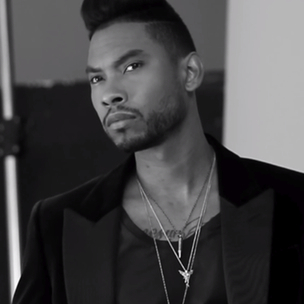 Miguel released Wildheart on June 26. The deluxe edition consists of 16 tracks that include features from Lenny Kravitz and Kurupt.

Miguel worked with German photographer Daniel Sannwald for the album artwork, which Sannwald says was inspired by LSD.

“I love anything psychedelic,” he says to Instagram’s blog. “I love colors. I love to create unexpected worlds.”

Sannwald heard part of the album prior to the shoot and knew he wanted a sexy vibe. He says Miguel went to extreme lengths to make sure the photos turned out well.

“He had a trainer on set, which I was really impressed by,” Sannwald says. “Between every shot they would work out a little bit to make sure everything looked as good as possible. And he didn’t eat the whole day — almost nothing.”

The two women that appear in the album art laying on lava rocks are fitness models that the team found on Instagram.

The Wildheart album art, tracklist and stream are below: