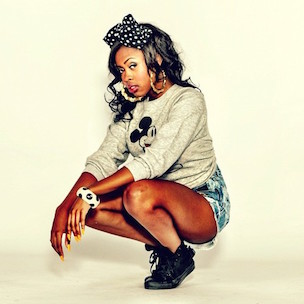 Tink Talks About Being Inspired By Nicki Minaj

Tink has been recording her debut studio album, Think Tink, alongside super-producer Timbaland in Chicago and Miami.

In a new interview with NY Mag, the Chicago-bred rapper said that her album is “not gonna sound like anything else out there today.”

“The sound is very next-level,” she says. “The message is still the same. I can never change that up. But the production and the overall sound, that’s very well put together now.”

“We’re just like family, we can talk for hours,” she says of her relationship with Timbaland.” A general night in the studio is like, we go in the lab, and then before we even hear anything we have a conversation… After we get comfortable, Tim will play some beats, and when I hear something I want to rap to, I run with it. I go into the lab by myself, and I put my spin on it, and then we go back in the lab together. We just go back and forth, like ping-pong.”

Last month, Tink shared that Missy Elliott would be featured on Think Tink. She told Sway on Sway in the Morning that Missy was like a “big sister” and offered her advice. But, it was another veteran female emcee that actually inspired her to start rapping.

“I’ll be honest with you, before I heard Nicki rapping, I probably wouldn’t have thought to rap myself,” Think told NY Mag. “Just to see a female doing it and being in there with the guys, it was motivation.”