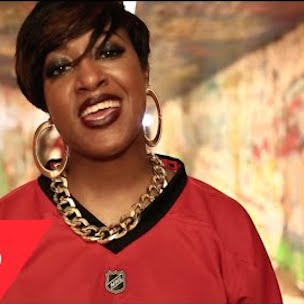 Many people were asking who Rapsody is after she spit some bars on Kendrick Lamar’s new album, To Pimp a Butterfly. In an interview with Vibe, the first lady of Jamla says that her appearance with Lamar on “Complexion (A Zulu Love)” gave her a wider audience.

“He’s put me on a platform and introduced me to a whole new audience who might not know any of my work,” she says.

She also says that she will be re-releasing her Beauty and the Beast EP with three new songs.

“Now I have people’s attention a little bit,” she says. “They’re more curious. So it’s like, ‘Oh, I like this verse. What else do you have?’ It just feels good.”

She also says that To Pimp a Butterfly perfectly conveys Tupac’s influence on the Compton rapper’s music. She was listening to the album with 9th Wonder when Tupac’s voice came on the closing track “Mortal Man.”

“I was like, ‘No way, he didn’t do that,'” she says. “But that’s beautiful because it goes back I remember to the dream he said that he had a dream about ‘Pac and ‘Pac said, ‘Don’t let my music die.'”

After To Pimp a Butterfly dropped in March, the North Carolina rapper said that she hadn’t heard Kendrick Lamar’s part of the song when she recorded it. When she heard the final product, she was impressed.

Watch the full interview below