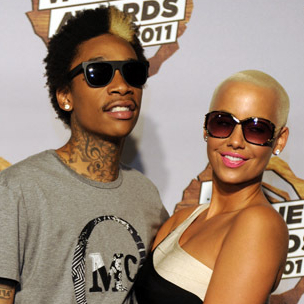 Wiz Khalifa and Amber Rose have agreed to co-parent their two-year-old son, Sebastian, according to TMZ.

The site says that the Pittsburgh rapper asked Rose to listen to his new song “See You Again,” which appears on the Furious 7 soundtrack.

“How could we not talk about family when family’s all that we got?” Wiz Khalifa sings on the cut. “Everything I went through you was standing there by my side / And now you gonna be with me for the last ride.”

After hearing the song, Rose reportedly called Wiz and agreed to work with him regarding raising their son.

“Since I filed for divorce my husband has been out with 50 different women,” she said at the time. “Pulling sweaty white bitches out the club. All these other girls, I ain’t even gonna talk shit, all these other girls, do whatever. Not only was I in the house crying everyday, mourning my husband, you know, I had to see that on top of it.”