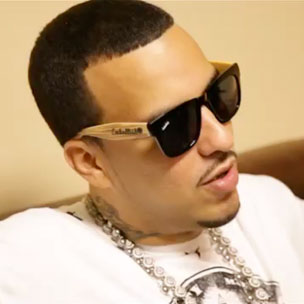 French Montana recently spoke with XXL’s Editor-in-Chief Vanessa Satten for an interview that appeared in the publication’s winter 2014 issue.

During the conversation, French detailed his upcoming album Mac & Cheese.

“Mac & Cheese is like my baby,” French says. “It’s the first [mixtape] I put out right after we did Coke Wave, me and Max B. Mac & Cheese really stands for soulful music. So if you see the title and you’re already a fan of my work, you know I’m coming with epic music.”

French also revealed that he has between 90 – 100 songs already recorded for the album. Every day, he says he’s been listening to tracks, narrowing them down and learning new things.

French has also had to fend off relationship rumors for the last few months. His public courting of Khloe Kardashian covered tabloids everywhere, but dealing with the reality TV star has definitely taught him a lesson or two.

“What I learned about relationships on this side is that they last longer when nobody knows your business,” he says in the Q&A. “I’m very private when it comes to me and Khloe. Khloe is an amazing person, one of the best people I’ve ever met in my life.”

His Hip Hop relationships have been profitable. Fortunately, there are a lot of rappers French calls friends.

“Definitely Puff, Ross, The Weeknd,” he says. “I mean, there’s a lot. The whole MMG family.”

French has worked with each of the artists he named. When asked about who he still wants to collaborate with, French named several choices outside of Hip Hop.

“I would love to work with Coldplay, Taylor Swift,” he says. “Max B again.”