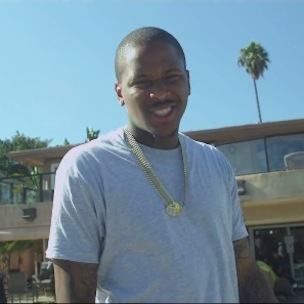 Just weeks after YG said his Grammy snub felt like a “slap in the face,” fans of the My Krazy Life rapper took to downtown Los Angeles yesterday (January 3) to protest his debut album not being included in the Best Rap Album category at the upcoming 57th Annual Grammy Awards.

YG acknowledged the support on Twitter but claimed he wasn’t involved with the protest that took place outside the Grammy Museum.

Check out pictures of the protesters below, many of which were young children holding signs with captions like”#bicketing” and “Honk For YG.”

Damn. This Brazy, my fans protesting about a nigga not bein Grammy nominated. I ain't tell Em do this doe ???? pic.twitter.com/a6GVTtOXWq

@YG they kicked us out of th Grammy Museum today bro pic.twitter.com/8H1dwNXf1t

In December, YG  stopped by Power 106 Los Angeles and spoke about the Best Rap Album category himself.

“Some of them albums is wack,” he said at the time. “My album is better than them albums. I feel like, how y’all—I already knew I wasn’t gonna win a Grammy. I’m like, ‘They not gon’ give me a Grammy but they gon’ nominate me for sure.’ It was just, when I seen some of them albums on there, it was like, I didn’t really get it. I really feel some type of way. I know it got something to do with me being from the streets and representing what I represent and talking about what I talk about on these records.”

Returning to the music, YG simply said, “My album is better than half of them albums on there. I’m not knocking nobody…I came up with Iggy. I know Iggy. ScHoolboy, all them. I’m rocking with them. I already knew they was gonna get nominated.”

In addition to Iggy Azalea and ScHoolboy Q, nominees for the Best Rap Album category at this year’s Grammy ceremony include: Childish Gambino, Common, Eminem, and Wiz Khalifa.