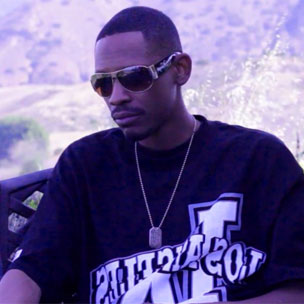 Kurupt Defends Donald Sterling: "They Took A Good Man Down"

Kurupt offered words of support for Donald Sterling and his mistress V. Stiviano in an interview posted by VladTV Wednesday (December 24).

“Mr. Sterling, I don’t have a problem with this guy,” Kurupt says in the video. “He’s a great guy.  But the thing is, you’ve got to keep your game clean. These people are always trying to take somebody down. Look he’s a great man. They took a good man down.”

Kurupt discussed the fallout of former Los Angeles Clipper owner Donald Sterling’s leaked conversation with mistress V. Stiviano. The tape was deemed racist and Sterling was kicked out of the NBA. Kurupt says that he supports Donald Sterling.

“He didn’t do nothing to nobody,” Kurupt says. “Who did he harm? What was his crime? Oh he’s racist…what did everybody thought he was before they heard it?”

Kurupt explained his relationship with V. Stiviano in the track “Politically Correct,” which was released in May.

Kurupt was spotted shortly after the incident this spring with V. Stiviano. He said she’s his homegirl.

“She don’t give a fuck,” Kurupt says. “That’s why I went to go talk to her and let her know, ‘Man, fuck these people. You and Donald is good. Man, fuck everybody, Just do what you do, enjoy yourself man, and just relax.’”

A majority of the Hip Hop responses to the Sterling situation indidcated a negative view of his behavior. Longtime Kurupt collaborator and LBC Doggfather Snoop Dogg voiced his opinion of Donald Sterling via Instagram in April.

Lord Jamar weighed it further on this controversy on April 30 via VladTV.

“I feel like that’s a dude that got caught saying what a lot of people think and practice but we’re not privy to the behind the scenes conversations,” Lord Jamar said of Sterling’s remarks. “Dude is definitely a racist. Dude definitely has the mentality of a slave master. But if we sit here and act like he’s the lone gunman in all of this then we’re only fooling ourselves. He stated himself that this is part of a culture he’s dealing with. This is a culture. This isn’t something that he just made up. This is something that exists within the stratosphere and class that he moves around in. So the fact that he was caught saying it is unfortunate for him, but to me it’s a blessing in disguise because it now puts Black people in a certain position. Now that this man has been caught as being openly racist towards Black people—and I told ya’ll that we was guests in the house of NBA prior to this and ya’ll was talking to me like I was ridiculous—now here we have a White man telling you that you’re a guest in the house no matter how much money you’re making.”