Although a large majority of the artists scheduled to perform at the Def Jam Records 30th Anniversary Concert had the opportunity to perform last night (October 16), one scheduled artist didn’t have the chance to grace the stage during the anniversary concert.

According to Jhene, she and her crew were mistreated by workers and told to “get the fuck out” of Barclays Center. She revealed that a female member of her management was even “physically assaulted” by a male worker.

A screen capture of Jhene’s response to a fan inquiring about her absence can be found below. 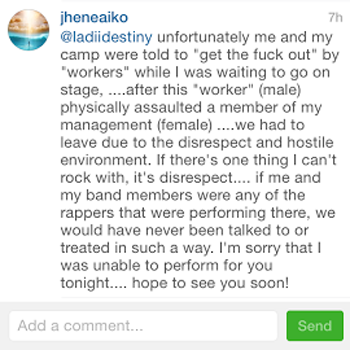 Despite Jhene’s canceled performance, a number of Def Jam artists both past and present did converge at Brooklyn, New York’s Barclays Center yesterday to celebrate the 30th anniversary of the iconic label.

Following the evening’s festivities, XXLMag.com provided a breakdown of the 30th anniversary concert. Among the artists the publication reports were present at the anniversary celebration were Onyx, Warren G, DMX, Fabolous, and Foxy Brown.

A number of onstage reunions took place, among them were reunions between Ashanti and Ja Rule and Swizz Beatz and DMX.

Foxy Brown’s appearance at the Def Jam anniversary concert served as one of the rapper’s first major performances following her release from prison earlier this year.

Miami, Florida rapper Rick Ross reportedly closed out the show with a medley of songs, which included “B.M.F.,” “Fuckwithmeyouknowigotit,” and “Keep Doin’ That (Rich Bitch).” The Maybach Music Group founder also brought out Stalley and French Montana during his set.

Video footage from the concert can be found below (via XXLMag.com).