Tyga recently relayed his displeasure with being a member of Young Money and now, another member of the team isn’t happy.

Lil Twist recently took to Twitter and blasted his management team calling them the worst of all time.

“I swear I gotta have the worst management team in the history of management teams,” he said via the social media site. “Like wow this sh*t crazy. All I wanna do is drop music.” According to Lil Twist’s Facebook, Cortez Bryant (who also manages Lil Wayne) is his current manager. He would later delete the tweet. Twist also took aim at who he considers “fake ass” promoters.

Lil Twist has never released a debut album as a Young Money artist and according to his tweet, releasing music on time or at all seems to be at the root of his frustration. He failed to drop his Golden Child 2 mixtape on its scheduled release date. Dropping on October 12 the tape was 11 days late of its original eyed release of October 1.

View all of Lil Twist’s tweets on the matter below: 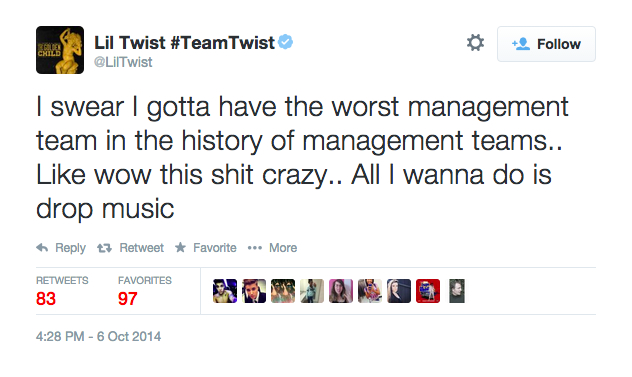