Talib Kweli, dead prez and Jasiri X are among the artists slated to perform at “Hip Hop 4 Justice,” a free concert presented by the organizers of Ferguson October.

The event is scheduled to take place Sunday (October 12) at Fubar in St. Louis from 1-6 pm CST.

“The show will bring together local acts with national artists who are standing in solidarity with activists in Ferguson for an afternoon of Hip Hop and social justice,” according to a press release.

Michael Brown, an unarmed Black teen, was shot and killed August 9 by a White Police officer in Ferguson, Missouri, catapulting the city into the national spotlight. Ferguson is about 13 miles northwest of St. Louis.

In August, Talib Kweli, J. Cole and Killer Mike were among the rappers to discuss the shooting and its aftermath. Talib Kweli and J. Cole also visited the Midwestern city.

The “Hip Hop 4 Justice” concert, which is open to the public and can be attended by people 18 years and older, is part of a larger Ferguson October initiative.

“Ferguson October is a series of protests rallies and events that will take place in St. Louis the weekend of October 10-13th,” the press release says. “The weekend’s activities will bring together thousands who want Justice for Mike Brown and will serve as a national call to action to eliminate racial profiling and police violence.” 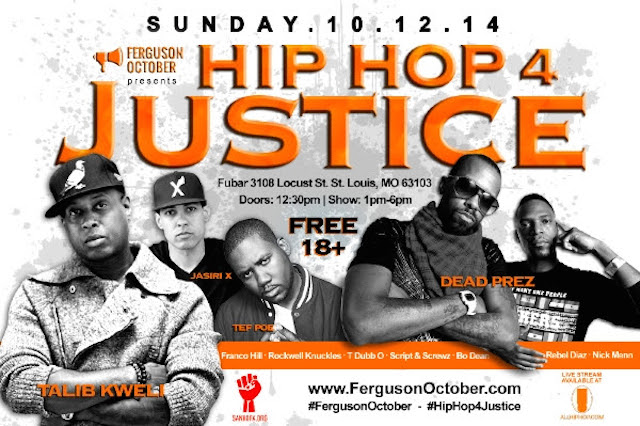