Nas' "Nas: Time Is Illmatic" Having One-Night Only Screenings

Distributed by Tribeca Film, the movie is also scheduled to be screened at 29 American cities October 2 as part of a one-night only screenings. The full list of the cities and venues is below, as is a poster for the film.

Nas: Time Is Illmatic is scheduled to be available on demand, iTunes, and other VOD providers October 3.

The film features Nas “returning to his childhood home in Queensbridge, Nas shares stories of his upbringing, his influences — from the music of his jazz musician father Olu Dara to the burgeoning Hip Hop scene in New York City — and the obstacles he faced before his major label signing at age 19,” according to a press release. “Featuring interviews with his Illmatic producers (Large Professor, Pete Rock, Q-Tip, L.E.S., and DJ Premier) and musical peers (including Pharrell Williams and Alicia Keys), Nas: Time Is Illmatic is a thrilling account of Nas’ evolution from a young street poet to a visionary MC.” 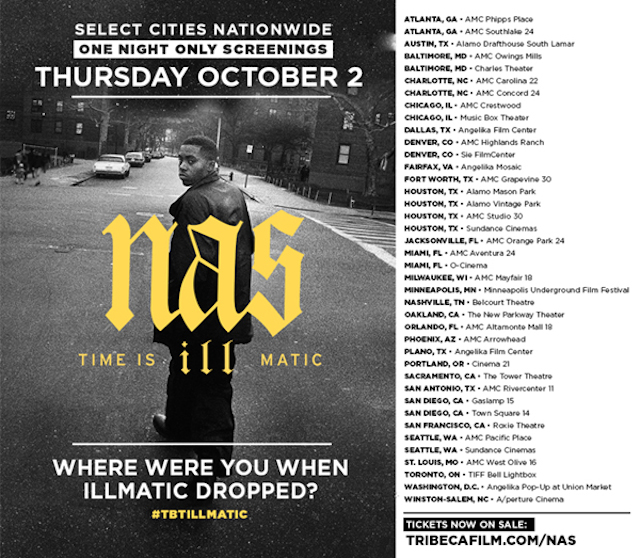