50 Cent says he has a message that may disappoint some people.

“I hate to disappoint you but I’ve run out of negative energy.the same effort i used to destroy, I’m using to build,” the emcee said via Instagram.

Perhaps this notion of turning a negative into a positive is what prompted this year’s G-Unit reunion. Earlier this year, 50 Cent mocked Lloyd Banks and Tony Yayo.

“Some people, they’re like milk,” 50 Cent said. “They have an expiration date and no matter what you do, they’ll spoil after a while.”

His feud with Banks, Yayo and Young Buck came to an end a few months after the comment about expiration dates was made. In June, 50 Cent reunited with the trio as G-Unit performed at New York radio station Hot 97. The group added Kidd Kidd to the mix and have been releasing songs as a unit since.

Despite the positivity of the reunion, 50 has also been in an ongoing feud with Slowbucks this year, one that included an alleged chain snatching and several points in which Bucks was called a “snitch.” 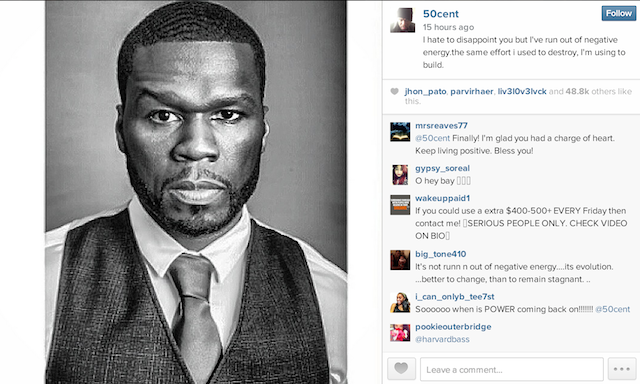