Keyshia Cole has released the cover art for her upcoming album, Point Of No Return, according to Rap-Up.

Cole’s cover features the singer in shades, jeans and a tank top on an empty road.

Keyshia Cole’s “Rick James,” a single off the upcoming project, features Juicy J and her selection “She” features production from DJ Mustard.

Wale, Future and 2 Chainz are among scheduled guests on the project and Mike WiLL Made-It and Mario Winans are among the slated producers on the effort.

Keyshia Cole recently spoke with Fuse about Point Of No Return.

“There’s definitely more sexy songs on this album than I’ve ever done,” she said. “I’m excited to see what the people think about that, so we’ll see how receptive they are to the album. I think it’s a great album and I feel like it’s one of my best albums to date.” 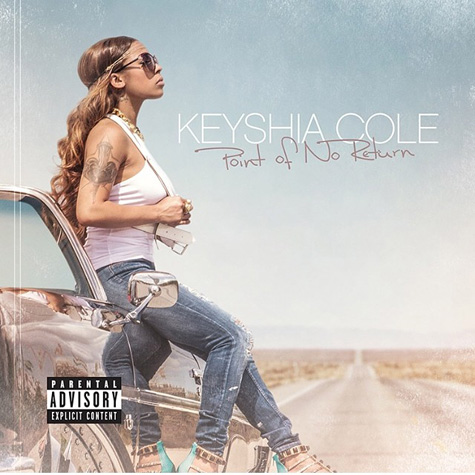 UPDATE: October 7 has been announced as the release date for Keyshia Cole’s Point of No Return album.

August Alsina is another act slated to appear on the collection, which also features production from Stargate, according to a press release.

UPDATE #2: Cole has revealed the tracklist for her upcoming album, according to HotNewHipHop.

UPDATE #3: Keyshia Cole’s Point Of No Return is below.