Krayzie Bone, who recently posted fan-art of a fake Wu-Tang Clan, Bone thugs-n-harmony collaborative album on Instagram, was asked about the likelihood of a joint project between the two groups during an interview with Vibe.

“Man, we have never had the opportunity to connect and do something with Wu-Tang, but I’m good friends with RZA and Method,” Krayzie Bone says. “The other cats I haven’t got to hang out with as much. Met Raekwon a couple of times. He’s cool. Met Ghostface, but you know—every time I talk to RZA and Meth, we talk about doing something. It’s long overdue. It’s just getting everyone’s schedules together and actually making it happen. We’ve talked about it. Everybody is down. I have ideas, because it’s something I’ve been thinking about for a while. I’d like to start off with a Bone and Wu cypher—get everybody warmed up and just kill it. That’d be crazy.”

The fan-art that Krayzie Bone recently posted features a Wu-Tang Clan logo behind the Bone thugs-n-harmony logo. It appears to be titled Shaolin To Cleveland: When Worlds Collide. Krayzie’s caption: “This Really Needs To Happen ASAP!!!!!” 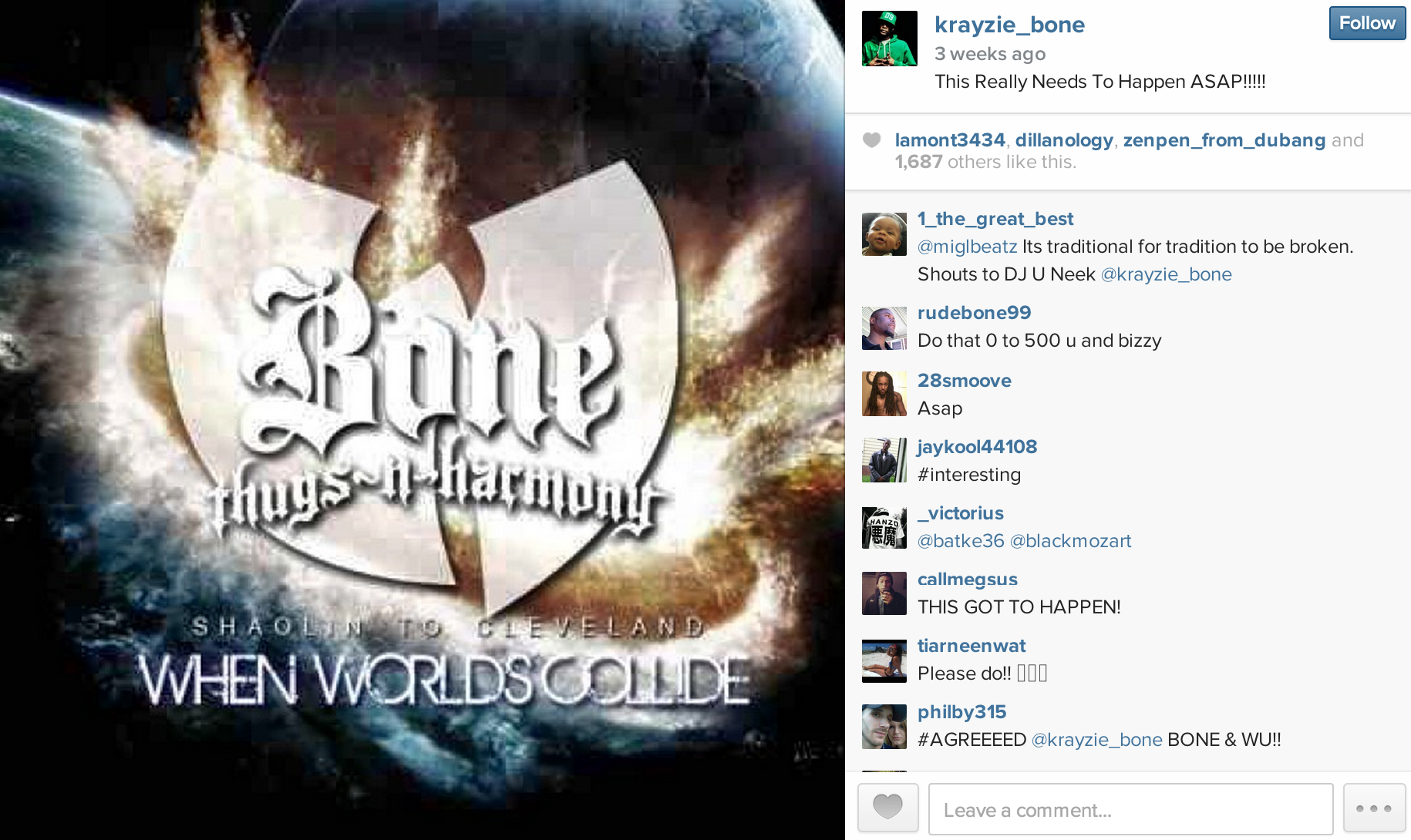 Recently, Krayzie Bone spoke with HipHopDX about Bone thugs-n-harmony’s $1 million album, which it plans to sell one copy of, and how it was influenced by Wu-Tang Clan’s plan to sell one unit of Wu—Once Upon A Time In Shaolin to the highest bidder.

“When I heard about what [Wu-Tang Clan] was doing—and I think it was you who told me about it—I just thought it was a brilliant and genius idea,” Krayzie Bone said to HipHopDX. “I thought to myself, ‘It’s not that many groups that can do something like this and have major results from it—Wu-Tang being one and us another.’ I took it back to my dudes and they thought it was a [great] idea. Ever since I told Bizzy [Bone] about it, he’s been on my neck everyday like, ‘Yo, we need to do this, Kray! We need to do this, I’m telling you. I love Wu-Tang, but I think we’ll have much better results, I’m telling you.’ We talked about it for a while, then we were coming up on this world tour. We said we need to do everything simultaneously. The idea for that is to make it the final group project. What better way to go out and to solidify the [Bone thugs-n-harmony] brand. I don’t see no other way. It has to be big. We have to make sure we reach everybody. So I think doing it like this will be huge, especially for our last group album.”

Krayzie Bone: “Eminem Is A Beast”

Krayzie Bone, who remade Eminem’s “Rap God” in 2013, also spoke about his admiration for the Shady emcee during his Vibe interview.

“I’m just a student of Hip Hop,” Krayzie says. “I think Eminem is a beast, one of the deadliest emcees you’d ever listen to. A few fans were telling me, ‘If anybody can rap on [‘Rap God’] and make it sound good, it’s you.’ So I did it, let a few people hear it. I was just going to put it in the vault like I do a lot of stuff, but people that heard it were like, ‘You gotta put this out ASAP.’ I’m glad I did.”