Kanye West’s rants are the subject of a recent Funny Or Die parody piece.

The comedic site published a parody setlist said to be for a Kanye West show. The setlist features two songs followed by a “17 minute rant about why I’m mad at Louis Vuitton right now.” The setlist continues with “Good Life” before moving on to a “20 minute rant about how I invented the concept of leather sweatpants.”

The setlist continues with variations of the above, all leading up to “BIG RANT,” which includes more rants. Finally, the setlist ends with “Fart into microphone and talk for 20 minutes about how good it smells.”

Kanye West’s rants have gained attention throughout the rapper’s Yeezus Tour sets, as well as the emcee’s various festival performances.

Kanye West recently made headlines with rants during his Wireless Festival performances. During one of his sets at the festival, West said the following:

“How many people wanna contribute something to the world? I know ya’ll might have seen some of my interviews and seen me on TV, but what I was saying the whole time is—I’m not particularly angry or anything like that—they taking the idea of celebrity and trying to make me seem like I’m stupid or something. You know, when I take these meetings and shit people will talk to you like you stupid or something…I’m not gonna call no names out, I’m not gonna mention Nike or nothing like that. I’m not gonna say no names or anything. But if you a creative and you wanna create and you just wanna create more this is exactly what I’ve been fighting for. So, if you hear me talking about Louis Vuitton or the Gucci Group or anything like that, I’m not dissing Louis Vuitton. I’m not dissing the Gucci Group and shit. I’m just saying don’t discriminate against me because I’m a Black man or because I’m a celebrity and tell me I can’t create. You know damn well no Black guys or celebrities making Louis Vuitton nothing. They let Pharrell make those glasses, and we liked’em right? They let me make those shoes and we liked’em right? They said, ‘No, no, no nigga. Not no more. That’s too much.’”

The parody setlist is as follows: 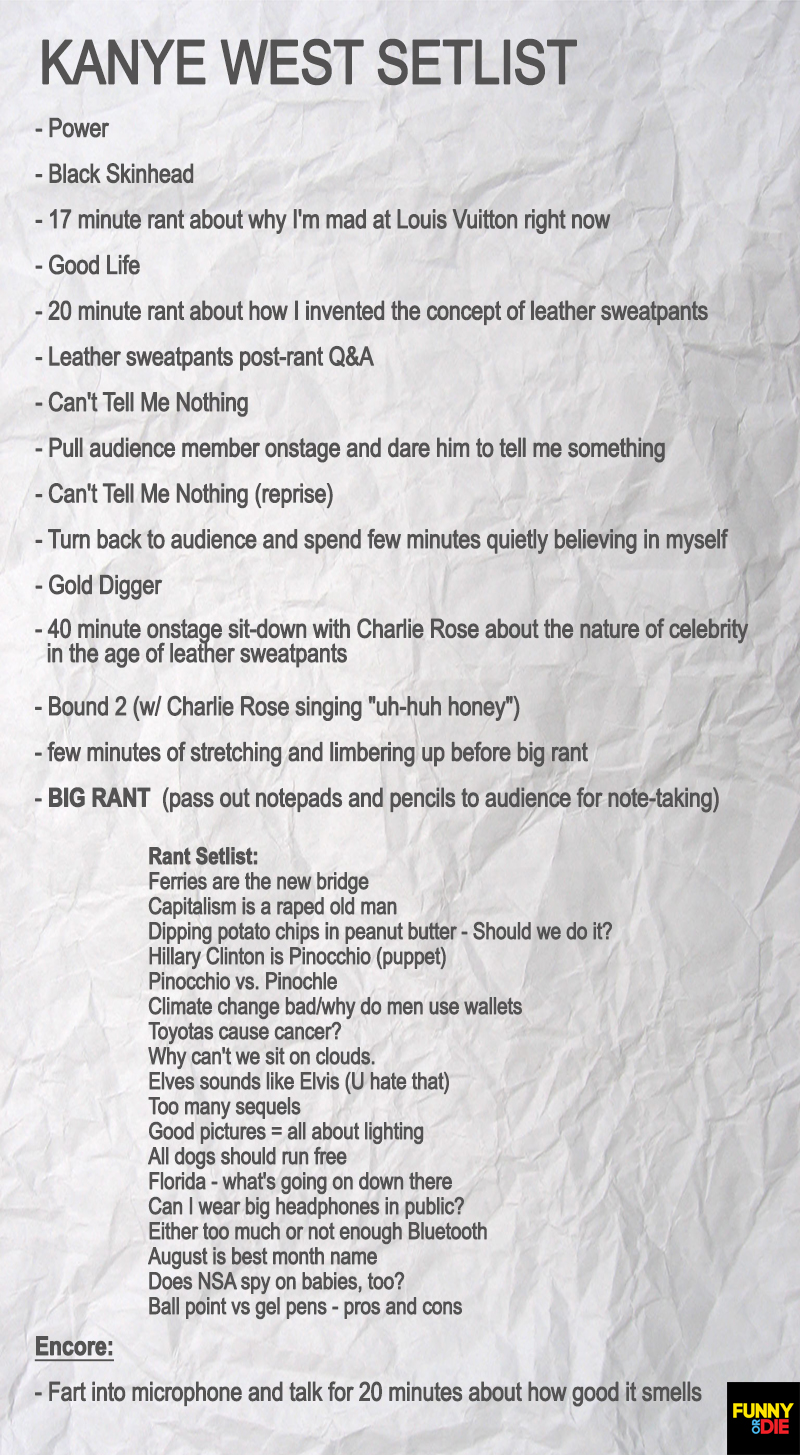