Chuck D recently posted an image of a letter he received from Tupac Shakur. The letter, said to be written in 1995, features the following message for Chuck from ‘Pac:

“I’m sure u know how highly respected & loved u R by me so your letter definitely warmed my heart. I was also touched by your offer and show of support. It will not go unnoticed. Thanx! It was good 2 hear how well u aRe doing but hey it’s only Right. Back in the dayz on tour with u I learned so much from what u did and how u did it. It may be hard 2 c but u have alwayz played a majoR Role in what it is I do 2day. I have a program I want 2 put together and I would like 4 u 2 be a part of it. I’ll explain it 2 u in detail on another occasion. I also have a part 4 u in this movie if u R willing and 2 push my luck even more I would be honoRed if i u would appear on this track 4 my next album ‘Euthanasia.’ The tRack is called ‘Da Struggle Continuez.’ It will also feature Sista Souljah if God wills. So let me know. I just Received woRd that my bail pending appeal has been granted so I should be free by the time u receive this…I just signed 2 Deathrow so I should be working on this album soon. Thanx Again Chuck! I do believe we can make a difference and I have every intention of doing just that. STAY STRONG!”

“By the way,I NEVER received PACs reply.He never sent it.He had to THINK before he sent it, HE told me later.I WROTE LIKE i write these twts.” 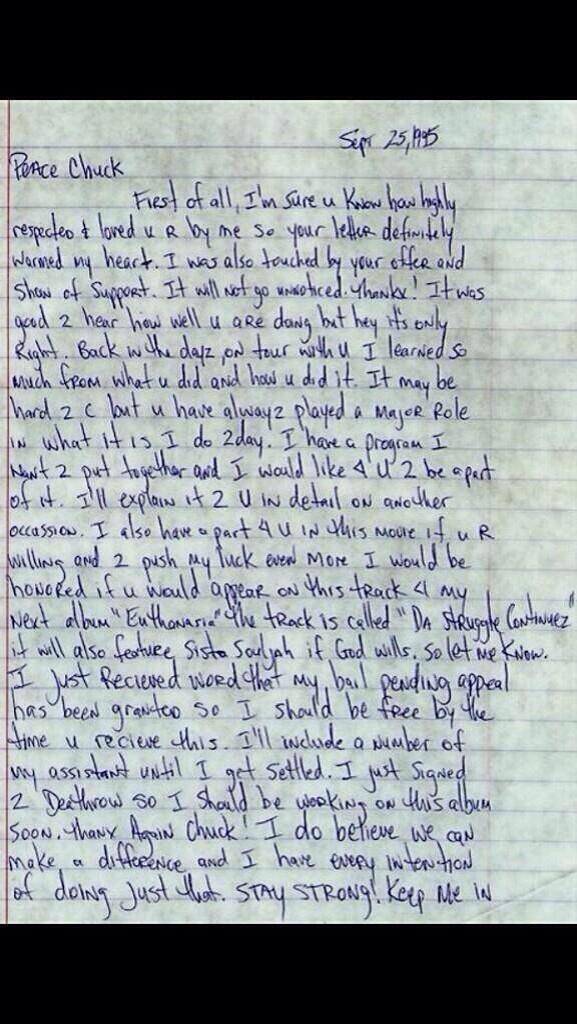