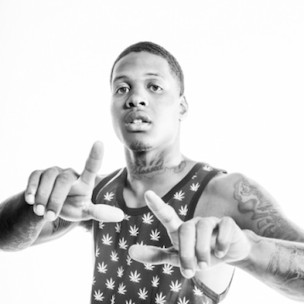 Lil Durk announced the title of his debut album via Twitter.

“My album #remembermyname,” the rapper wrote Tuesday (May 13).

Remember My Name has no confirmed release date. The album is set to be released by Def Jam, and OTF, Coke Boyz.

Lil Durk rose to rap prominence as an affiliate of Chief Keef’s Glory Boyz Entertainment (GBE) but never signed. Now, Durk affiliates himself with OTF, which stands for “Only The Family.”

The rapper released the Signed To The Streets mixtape in October under his own OTF and Coke Boys label. The project was featured on several “Best of the Year” lists.

Lil Durk grew up in the South Chicago neighborhood of Englewood. His involvement with the city’s gang culture forms the lyrical basis of his work.

The Illinois artist was also the subject of a recent diss from Young Money emcee Tyga on his track “ChiRaq to LA” with Game.

“Who the fuck is Lil Durk? / I dust you like ash and purp / Your flow wack, my flow crack / Got marble floors, your floor’s cracked,” Tyga raps over the beat to Nicki Minaj and Lil Herb’s “ChiRaq.”

Lil Durk has not made a response record. He has gone on record saying that Chief Keef’s support of the Tyga song shows a disrespect for Chicago.

“When the Tyga and Game song [‘L.A. To ChiRaq’] dropped, he posted it on his page,” Durk said in an interview with WGCI. “I’m like, ‘He ain’t disrespect me only. He disrespected the whole Chicago. He ran with another city…I’m not reaching out to [Chief Keef]. It’s over with. He from L.A.”

Durk was one of four Chicago rappers to be featured on XXL’s 2014 Freshman list.

Lil Durk released a music video this week (May 12) with Young Thug for the track “Party.”