Pharcyde members Slimkid3 and Fatlip, and producers J-Sw!ft and LA Jay are touring as Bizarre Ride Live. The group is performing with Slum Village on the Welcome To Dillaville tour, which is slated to stop today (May 5) at Hawthorne in Portland, Oregon.

In an exclusive interview with HipHopDX, Slimkid3 says that after two decades, he has outgrown his lyrics from the album.

“I have outgrown all of it, even what I wrote yesterday,” Slimkid3 says. “You’re consciousness develops. It opens up more. So you see things in a more magical way. Or you can look back and be like, ‘Oh, the way that I thought back then, that was kind of stupid…’ The universe just shows us. I always say, God’s big ‘Haha.’ Right when we grasp onto a concept to call it real, it disappears. It’s forever changing. We continue grow into a different you and you reflect on what you made then and you look totally different.”

Slimkid3 says the music industry has changed dramatically since The Pharcyde signed its record deal for Bizarre Ride II The Pharcyde.

The Hip Hop scene of today is not as strong as Slimkid3 would like to see it. He says that many artists jump at any opportunity to make money, without regard for the heart and soul of the music.

“What we’re looking for, as true Hip Hop heads and just people in general, is the sincerity and the soul,” Slimkid3 says. “This is kind of like a wish list for me. I’ll be glad when the soul returns to the music and the creativity and the artwork. Sometimes it’s not even for me to judge what’s out there right now. I wish a lot of it was better, but I could always change the channel and buy what I do like.  I’ll gravitate to what is soulful, what is honest, what is sincere, you know? I really dig that.”

As Pharcyde emerged during the 1990s, it became one of the first groups to work with the late J Dilla. The Detroit-born record producer and emcee went under the name Jay Dee back then.

J Dilla died of cardiac arrest in 2006. Slimkid3 said that J.Dilla’s music was so powerful that he deserved more praise during his lifetime.

“When he was alive, he was really doing some amazing work,” Slimkid3 says. “You couldn’t stop him. The way that he made beats was super organic. The way that he chopped up samples was super organic. He really freaked the shit. He really knew what the fuck he was doing. People should have been paying homage to him, in the great ways that they do now that he’s passed on. It’s unfortunate that that happens to super artists. They pay attention when he’s gone or try to be on the bandwagon or whatever. All of that shit aside, the music speaks for itself. Just to listen to Slum Village itself, just listening to [Fantastic, vol. 2]. Just listen to ‘Conant Gardens.’ Just listen to that track and check the bounce and the rhythm of how they went about everything that tells you right there.”

In 2000, Dilla’s group Slum Village made its national debut with Fantastic, vol. 2. Slimkid3 says that J. Dilla’s legacy is remarkable because he was able to change the face of Hip Hop through his personal style.

“When they stepped on the scene, they really changed Hip Hop,” Slimkid3 says. “They really changed the bounce and the flow. Hip Hop has gone through a couple of changes. It went from the Sugarhill Gang, to Run-DMC, the Beastie Boys, to De La Soul, A Tribe Called Quest, Leaders of the New School, Pharcyde, Nasty Nas. I mean the list goes on, the super major changes that happened sonically with Hip Hop.  When their shit hit, it was a whole ‘nother cadence that happened, a whole’ nother flow. It opened up its own little sub –genre. It did a lot man. And he was a part of it, shit, he worked with Erykah Badu. He worked with Biggie, man, come on.”

Slum Village continues to make music and tour. Illa J, the younger brother of J. Dilla, is a current member.

Slimkid3 said Bizarre Ride Live got involved with the Dilla tribute after a trip to Europe with Slum Village last year.

The Welcome to Dillaville itinerary is as follows: 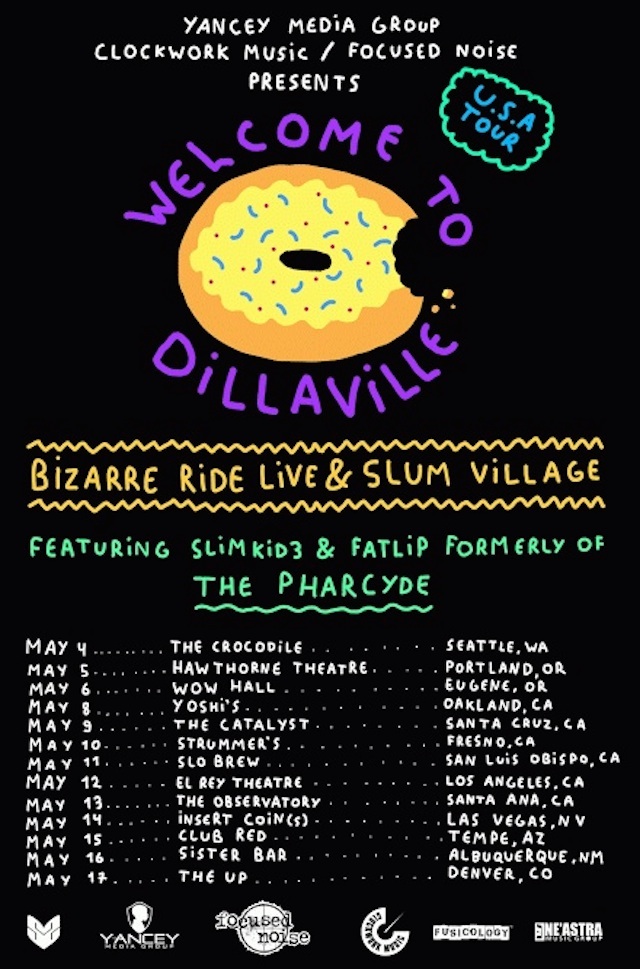