“I can’t sleep my anxiety is at an all time high but don’t none of y’all care about that shit .. Y’all just want me to be goofy,” Brown said in a Twitter update.

The Twitter updates also discussed Brown’s drug use, which he elaborated on. “Depression is serious y’all think I do drugs cause it’s fun … I would no other way to escape,” he said. “Nobody cares if I live or die .. That’s the bottom line .. Y’all want me to overdose just don’t be surprised when u get what u asked for.”

Brown deleted many of the Twitter updates he made yesterday and ReTweeted followers’ well-wishes. One of those Tweets of encouragement came from Andrew W.K. “STAY STRONG, DANNY!!! Keep on going!!! So we can party together again,” Andrew W.K. said on Twitter.

Brown released Old in 2013. The album released a 4 out of 5 X rating on HipHopDX. “Simultaneously targeting fanatics who believe Danny Brown can do no wrong and traditionalist skeptics who show up for highlights like the Oh No produced ‘Red 2 Go,’ Old requires the patience and empathy one would lend to a friend suffering from a bipolar disorder,” HipHopDX said at the time. “Its primary shortcomings stem from ambition gone awry (examples include the pop flair of Purity Ring on the off kilter ’25 Bucks’) and experimental beats that don’t necessarily bring the best collaborative efforts out of ScHoolboy Q (‘Dope Fiend Rental’), Ab-Soul and A$AP Rocky (‘Kush Coma’) to no fault of their own. Notable attempts to unmask Danny’s conflicted facade, ‘Clean Up’ finds him detailing the tolls that being on the road so often have taken on his well being and ‘Float On’ rationalizes his psychosis as the result of pressure to create compelling art. Whether the enigma of Danny’s ongoing identity complex is an elaborate ruse he controls in efforts of not being boxed in has yet to be determined, but the most exhausting aspects of his routine manage to convey an occasionally exciting tale of instability.”

Brown’s Twitter updates can be found below, as reported by HotNewHipHop. 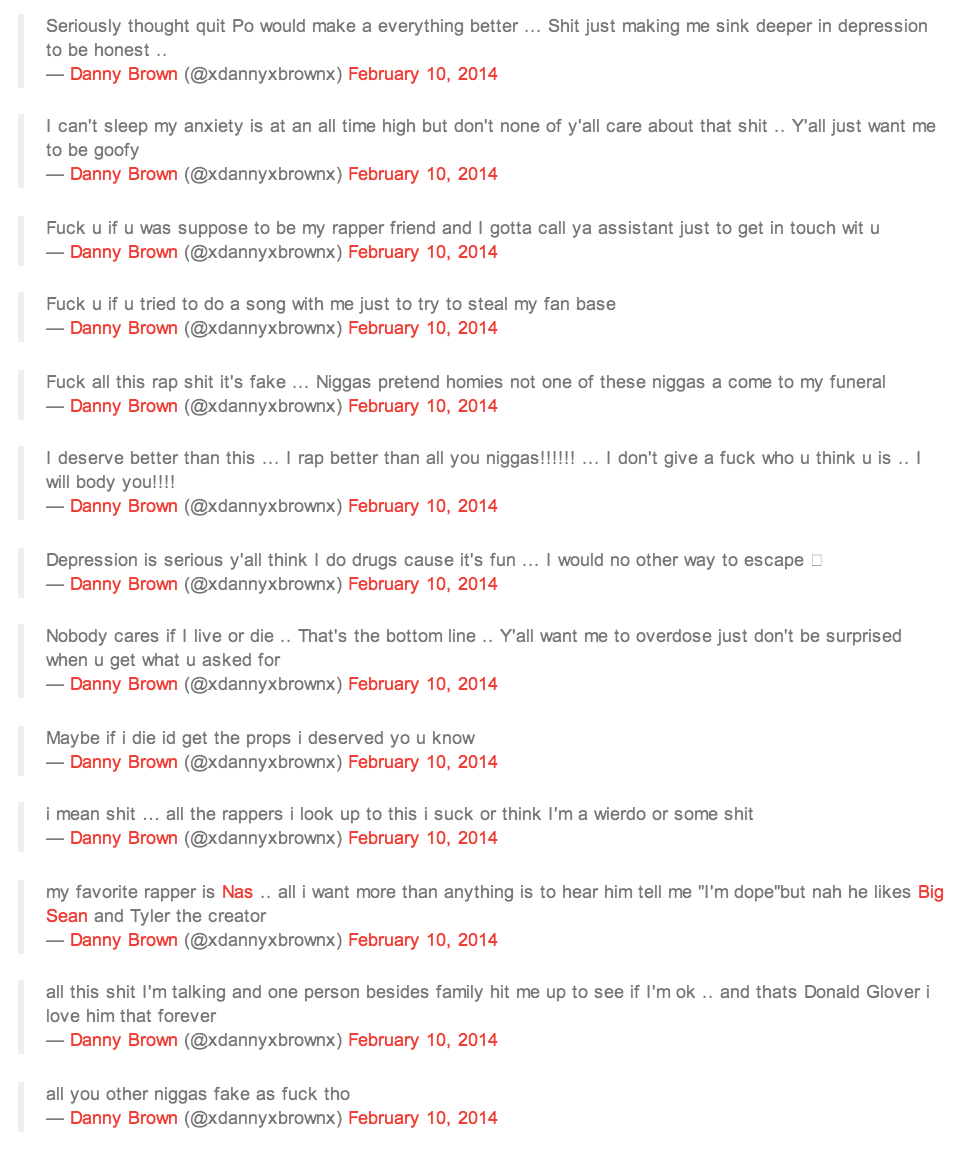