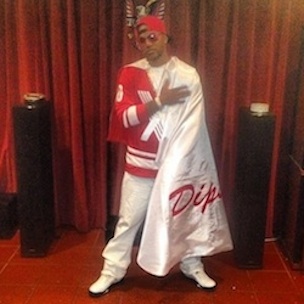 Cam’ron posted on Instagram yesterday (January 6) that he is developing a line of capes.

Cam’ron wore a Dipset cape during Super Bowl weekend (photo at right) and also during a 2 Chainz performance in New York earlier this month.

On the music side, Cam’ron and A-Trak have joined forces for Federal Reserve, a collaborative EP that pairs Dipset with Fool’s Gold Records, according to A-Trak.

The collaborative project, which Complex says it slated to be released in Spring, was originally announced via Instagram. A-Trak posted a video on the social networking app that features Cam’ron’s voice and the Diplomats and Fool’s Gold logos.

Cam’ron’s Instagram post and a video of him performing wearing a cape during 2 Chainz’s concert are as follows.

UPDATE: Cam’ron and JuJu showcased their line of capes at New York Fashion Week. Below, a video from Miss Info features Cam’ron wearing a cape at the event.